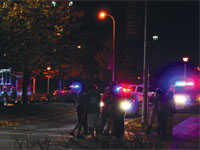 ForeWarn was used for a police matter early Tuesday morning for the first time since its inception in 2007.

The text went out to the campus community after a police chase ended with a suspect on foot in the area.

But not everyone on campus received the message. Those whose cellular service is provided by either Sprint or U.S. Cellular didn’t receive the initial text, but the all clear message was delivered.

“All the carriers got it, but some didn’t handle it properly,” said Chuck Ruch, associate provost for Information Resources and Technology. “We’re speaking with our vendor [which delivers the text to the cell phone companies].”

The problem was that the first text was longer than 160 characters, which split the message in two. And for some reason, Sprint and U.S. Cellular couldn’t handle the two separate messages.

Ruch said while the problem is resolved, the school will make sure any texts sent out are less than 160 characters.

More than 5,000 students, faculty and staff are registered for ForeWarn.

The ordeal started about 12:30 a.m. when an employee of the Buffalo Wild Wings restaurant near the Shoppes at Grand Prairie in northwest Peoria was taking out the trash.

The employee was approached by two men armed with guns. The men tied him up, gagged him and robbed him of his cell phone and wallet.

A few minutes later a second employee, also taking out the garbage, was approached by the men, who placed a stun gun on her arm and activated it.

About 30 minutes later Peoria police located a car matching the description given to them by other restaurant employees near the intersection of War Memorial Drive and University Street.

The car fled from police south on University. As the car traveled south at a high rate of speed. It lost control just north of St. James Street.

The car drove through the black perimeter fence in front of Geisert Hall about 1 a.m., skidded through the grass and drove over St. James Street before coming to a stop next to the Bradley University sign.

Neither the sign or any buildings were hit by the car.

After the crash, the driver of the car fled the scene on foot. Once University Police were made aware the suspect was near campus on foot, the initial ForeWarn message was sent informing students of the situation and telling them the campus was on lock down.

By 3:30 a.m., after an extensive search with police K-9 dogs, BUPD determined any threat had passed and sent the all clear message.

The passenger of the car, Nicholas J. Humes, 22, was arrested and transported to OSF Saint Francis Medical Center.

The restaurant employee who was stunned was treated by paramedics at the scene.

Administrators aren’t sure yet when the fence on University Street will be repaired. They are also unsure of the cost of the damage, but did say that it would be nominal.

Police are still searching for the second suspect.