CAT cuts back on jobs, students to feel effect 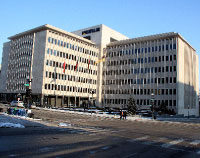 Upon Caterpillar Inc.’s announcement on Monday that it is cutting 20,000 jobs, spokesperson Jim Dugan said the outlook for the future is uncertain.
“We have instituted a hiring freeze, which we announced in December, and it’s in response to the global recession, which is having an impact on our business and customers,” he said. “We announced a pay freeze for existing employees, we’ve announced significant compensation reductions for our managers and executives. We can’t really say what’s next.”
About three-quarters of the 20,000 jobs have already been cut, but Dugan said he’s not sure how many of those have come from the Peoria area.
Executive Director of the Smith Career Center Jane Linnenburger said although most students interning in the spring still have their positions, students who were going to intern in the summer and fall have received letters saying their offers have been rescinded.
Senior electrical engineering major Sam Price said he interned with CAT for a year and a half and was planning to continue, but was told his position is no longer available.
“From what I heard, all the interns in my department didn’t get renewed,” he said. “I graduate in May. They told me to stay in touch with them and that the people that stay in touch with them are most likely to be hired. I’ve been keeping in touch, but it’s not looking good.”
In addition to job cuts, those who had offers to start jobs in 2009 received letters saying their offers have been rescinded.
Bradley graduate Greg Marsh said he accepted an offer from CAT in August. He said he was called Dec. 19, the day before he graduated, and told that his offer no longer existed.
“It was a [human resources] person, so she just called and said they were going to rescind my offer,” he said. “They gave me a little money to kind of differ some of the losses. They were really professional. You could tell the woman didn’t like giving me the bad news.”
Linnenburger said the length of a hiring freeze depends on business conditions and can be as short as a semester or as long as five years.
“I’ve been through four downturns with recruitment for college students,” she said. “After each and every one [recruiting] has come back strong. Companies, for the most part, believe in the importance of having new college grads because of the skills, knowledge and tremendous values they add to their organizations.”
Also on Monday, CAT announced that 2008 was its best year, grossing $51.3 billion, a 97 percent increase from 2007.
Dugan said CAT is estimating to make about $40 billion in 2009, a 20 percent decrease from 2008.
He said the company expects profit to be about $2.50 a share. Last year, it peaked at $5.66 a share.
“We are facing an incredibly challenging year, and we are expecting to see significant reductions in our revenues and earnings, Dugan said. “We are working very hard to see that CAT remains a profitable company.”
Linnenburger said the career center is “working with students and graduates to find new opportunities that have been taken away by CAT.”
It has also set up several career workshops, some focusing specifically on resumes.
“It’s more important that ever this year that students have their materials prepared the best they could be,” she said.
Although a hiring freeze is in effect, Linnenburger said CAT representatives will be attending Wednesday’s job fair to talk to students about keeping Caterpillar in mind for when opportunities are available.
“CAT will continue to offer assistance in helping students prepare for their careers, even if it isn’t careers with them,” she said. “They will be attending resume critique day and alumni will be in our career panels.”
More from NewsMore posts in News »