Center Court’s extended hours good for business, will continue in the fall 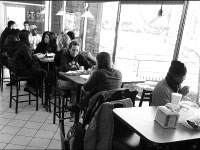 The extended hours at Center Court have proved to be a hit with students seeking out a late-night snack.
Hundreds of students per night have taken advantage of the new hours, extended from 8 p.m. to midnight a few weeks ago.
“It’s really convenient for late-night cravings, grilled cheese runs, things like that,” freshman sports communications major Kristin Disanti said. “I know a lot of students whose classes don’t get out until nine, and everywhere else is closed. Instead of having to make Easy Mac in their dorms, they can come here now.”
Center Court employees said they are pleased with the new hours as well.
“The only reason I have this job is because of the extended hours,” Center Court employee Ariana Maloy said. “This third shift opened new positions for people.”
Maloy said she expects the longer hours to be a permanent change.
“I guarantee you that next year, Center Court will stay open until midnight,” she said. “We just get so much extra business from this.”
Chairman of Campus Affairs Jimmy Lombard said he has only heard positive feedback from students.
“Everyone I’ve talked to said it’s really convenient,” he said. “I’ve gone over there periodically throughout the week, and every time I do there are always people there.”
Director of Dining Services Ron Gibson said the hours were also extended 10 years ago, but it was not as successful as it is now.
“This time, we have a whole new group of students,” he said. “We’re open to trying anything, whether it works or fails.”
Lombard said Center Court’s central location has been beneficial.
“The location is great, and right now it’s nice because there’s extra seating on the patio,” he said. “Campus isn’t that big, so in the winter if there aren’t many open seats, people can even bring food back to their dorms.”
Lombard and Gibson said they have some plans in motion for next year.
“At the kick-off party, Rockstar [energy drinks] and Power 92.3 came, and they enjoyed being there,” Lombard said. “There’s a possibility of them stopping by maybe once or twice a month to promote.”
Gibson said he was going to try to get area restaurants to come in and support themselves at Center Court.
“It’s just an idea, but it would be a free promotion,” he said. “If they’re a little bit off campus, it’ll be a good way for students to see what they have.”
Gibson said the new hours are meant to work in sync with Lydia’s Lounge.
“Center Court closes on Friday nights at 8 p.m. when Lydia’s Lounge opens,” he said. “All the employees at Lydia’s Lounge are students so we don’t want to take away from them, but when Lydia’s Lounge is closed during the week students still have a place to go.”
Gibson said the new hours have been a big success.
“I can’t imagine not doing it next year,” he said.
Lombard said students will receive a survey soon where they can voice their opinions on Center Court’s new hours.
More from NewsMore posts in News »