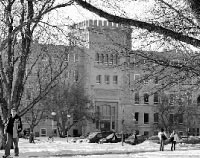 Snow, ice, wind and severe wind chills, all staples of a stereotypical Midwest winter, have been going at it full force this season and show little sign of letting up in the near future.
With another three inches of snow accumulation this week, students have been trekking to and from classes bundled up in coats, hats, mittens and scarves. As if keeping out of the cold wasn’t hard enough, students have been facing yet another problem this winter season.
Fluctuating temperatures melting the snow and refreezing it hours later has caused a lot of ice accumulation on campus. While most of the streets and parking areas have been salted and plowed, the ice seems to be a virus the campus can’t be cured of.
Grounds supervisor Stanley Glazier said keeping up with the ice has been an ongoing project for him and his crew.
“It’s been a little worse this season mostly due in part to the fluctuation of the temperatures,” Glazier said. “Ice melt product and salt only work with temperatures in the mid-20s or low-30s.”
With extreme temperatures, including a record-low temperature of 21-below on Jan. 9, the Peoria area has been facing a winter weather crisis.
Meteorologist Ed Shimon said these temperatures were not common to the area since this kind of weather is usually only seen once a decade, according to the Journal Star.
With many students home for Winter Break, Glazier said the on-campus problems were not too difficult to handle.
“It really was a blessing that all this weather happened when students were gone on break,” he said. “If students had been here when it happened, the traffic would have packed the snow down so much removal would have been near impossible.”
Using nearly 48 tons of ice melt and salt product since Dec. 1, the amount of time and effort that went into snow removal has left its mark on the campus grounds crew.
With constant thawing and refreezing, crews have required to work overtime to clean up snow and ice that has melted after the initial plowing.
Equipment used on campus also begins to show its wear after a long, cold winter.
“With such low temperatures, our machines begin to take more and more to get going and get started,” Glazier said. “More use means more replacements. We just bought new rotary brushes to attach to our tractors to sweep off the sidewalks and we had to replace them after just a month of use.”
Glazier said his employees are dealing with the temperatures the best they can. At a certain point, working outside for long periods of time in the cold yields little results and can also be dangerous to grounds crew members with things like frostbite.
However, Glazier said he sees a light, perhaps the sun, at the end of this cold, blustery tunnel.
“I’ve been watching the weather to see what we would have in store for us in the next 30 days,” he said. “We’ve been told that February is to bring normal temperatures and normal precipitations, so I’m hopeful.”
Surprises can happen though.
“We were told December would have lower than average precipitation,” Glazier said. “We all saw how right they were on that one.”
More from NewsMore posts in News »