Class of 2014 enrollment expected to be successful 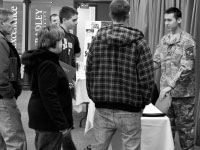 It’s crunch time for campus enrollment offices and with higher incoming freshmen and transfer goals for the fall, Vice President of Student Affairs Alan Galsky said he believes the class of 2014 will be high in numbers.
“We had a very proactive year last year and this year we are doing the same,” he said.
Galsky said based on the success the university reached with the class of 2013, enrollment goals increased to 1,120 incoming freshmen
He said the number of students who are interested and applied to Bradley have put the university in a good position.
“With a record number of applications and admits last year and receiving 100 more applications this year, there is no reason not to believe that this year wouldn’t be as successful,” he said.
Since 2008, there has been a 6.5 percent increase in the number of applications. From last year alone the number of applications received increased by 2 percent.
Galsky said with more individuals aware of the economic situation, it has made the enrollment process more competitive.
To keep up, he said they have completely revamped everything from adding more tours to encouraging more promotion of the university.
“We have added more visit days and have established stronger partnerships with community colleges to make the transfer process smooth,” he said. “We have also been emphasizing the recruitment of out-of-state students, the entire university has worked really hard to promote Bradley University.”
With the class of 2013 being one of the largest yet to come through Bradley, space in residence halls next year is already questionable.
Heitz Hall Director Nick Stocchero said he has struggled handling conflicts with minimum space.
He said by having such a large freshman class the ability to adjust moves regarding roommate conflicts and to accommodate students with special needs has been minimal.
“Last year by second semester there were five vacant rooms within the building for room adjustments, this year we are filled to the max,” he said. “There are still students who would like to be moved but with the limited space it isn’t possible at the moment.
“By having another large class move into dorms, on top of the freshman class this year, it would only get worse,” he said.
Stocchero was also a member of the housing committee which examined residence halls last semester. He said he fears bringing more students onto campus will cause more problems.
“If there are larger and larger classes coming to Bradley it will become easier and easier to see the changes that need to be made within the dorms,” he said. “Another large class would restrict facility space such as laundry rooms as well as common areas and other communities facilities.”
Galsky said he didn’t believe another large class moving in would cause major conflicts in dorms or classrooms.
“I’m not concerned this year [about space conflicts],” he said. “We have had these kinds of issues before, with other classes in the past. On top of that we will have additional facilities, like Westlake Hall, that will be joining the campus which will allow us to be successful enough.”
More from NewsMore posts in News »