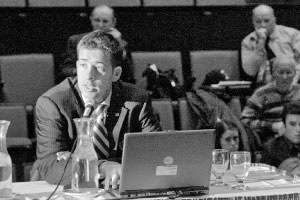 Group meets on campus to discuss cleaning up Springfield
Theatrical, shameful and disgraceful were some of the words used to describe Illinois politics at the latest meeting of the Illinois Reform Commission.
The fifth meeting of the commission took place Monday in the Hartmann Center.
The goal of the commission is to clean up politics in Illinois.
Executive Director of the Institute for Principled Leadership and Bradley Alum Brad McMillan is a member of the commission.
“These issues of governmental structure are little understood by the average Illinoisan,” he said. “The media does not give in-depth coverage of these issues either.”
One of the issues discussed at the meeting was the extensive power given to state leaders.
“The checks and balances designed by the Illinois Constitution in 1971 have failed us,” former Illinois State Sen. Steve Rauschenburger said. “The Senate President and Speaker of the House see themselves as partisan leaders first and Constitutional leaders second.”
Rauschenburger addressed other areas of concern such as outside income for state leaders.
“State leaders have other jobs while in office and we should require them to be exclusive employees of the state,” he said. “Having another job causes an obvious conflict of interest.”
The abuse of the Rules Committee was also discussed.
“The Rules Committee was supposed to be a place where a bill is delegated to another committee for consideration,” Rauschenburger said. “Now people are saying it is where good ideas go to die.”
State Treasurer Alexi Giannoulias addressed Illinois Public Employee Retirement System reform.
“Insiders control the board in charge of the pension system and force it to invest in firms who then give them kickbacks worth millions,” he said. “The solution to this problem is more requirements for people to become board members.”
The most discussed issue of the meeting, however, was gerrymandering.
“Representatives and senators are selecting voters rather than the other way around,” professor of political science at Southern Illinois University Carbondale John Jackson said. “The Illinois Constitution says ‘all legislative districts shall be compact and contiguous’ but the 15th and 17th districts certainly are not.”
The 17th district stretches from the Quad Cities, south along the Mississippi River, and juts inland to Decatur.
Two of the models considered for solutions to gerrymandering were the Iowa and California models.
“California considered appointing retired judges to draw legislative districts and that was voted down,” Jackson said. “The Iowa plan delegates district drawing to a Legislative Service Bureau consisting of technical experts required not to consider partisanship.”
Jackson also said since 2002, Iowa has had more competitive races than Illinois, California and New York combined, despite its small size.
“There is no chance of getting the Iowa plan through the system as it exists,” Senior Fellow at the Institute of Government and Public Affairs James Nowlan said. “A referendum with several hundred thousand signatures would be required to put it on the ballot.”
Senior political science and international studies major Sarah Shadnia spoke at the end of the meeting.
“Blagojevich was only the tip of the iceberg of corruption,” she said.
Giannoulias said his biggest concern is the effect this corruption will have in the future.
“There are plenty of talented, capable people in the private sector and they will see all this corruption and decide not to enter politics,” he said.
The committee’s initial recommendations can be found at www.reformillinoisnow.org.
More from NewsMore posts in News »