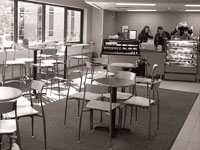 The most common place students find themselves during late night study sessions is the Cullom-Davis Library.

Bradley has been making some changes to the library in order to make it a bit more comfortable for those all-nighters. The most recent of these is the opening of the library’s new coffee shop.

The cafe has been operating without a name since August. Now, it has been decided the coffee shop will be called “The Stack.”

“The committee evaluated several suggestions and The Stack was the preferred name,” Galik said. “The inspiration is the stacks of books that fill the library.”

While a logo has not yet been decided, new signs are expected by the end of Winter Break.

The Stack will also have new hours of operation, effective Monday, opening at 8 a.m. and closing at the same time the library closes.

Students said they agree having the coffee shop located in the library is extremely convenient.

“Having the coffee shop right there in the library is great because I am able to have a cup of coffee when I am there studying late,” said freshman elementary education major Marissa Maiorano.

Students also said they feel the name of the coffee shop is appropriate for its location, as well as the purpose that it serves in providing convenient access to snacks and coffee throughout the day.

Other efforts are going to be made by the library to make it a more comfortable and well-suited place for studying.

Galik said new electrical outlets are going to be installed on the first floor of the library to allow for easier access to power for students.

“These improvements are being made to make the library more student-friendly and comfortable,” Galik said. “Additional enhancements are planned in the coming years.”