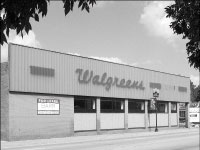 By next year, a new apartment complex on Main Street will have hopefully injected some “vitality” into the area, city planners said.
The area between Main, Underhill and Russell Streets and Bourland Avenue now houses single family homes, a vacant lot and a vacant Walgreens building. But construction on Main Street Commons, a mixed-use structure including apartments, retail space, parking lots and a pool with a pool house, will be built in the area.
The project will be funded by Oxbow Development Corporation, Devonshire Group according to a petition submitted to the Peoria City Council. The apartment buildings, one five-story and one three-story, will hold up to 348 people in two-bedroom and three-bedroom units.
Senior Urban Planner for the city of Peoria Kim Smith said Main Street Commons is to be built in an area that is meant to encourage “mixed use” buildings, such as retail space on the ground floor of a building and apartments above.
“Instead of driving to CampusTown and then driving to a restaurant and then driving to another place, you park once and go – it’s a campus-type environment,” Smith said.
She said the development isn’t officially student housing, but it is geared toward students.
“The expected population is people who are focused on classes at Bradley,” she said.
Smith said the development will “dramatically change the look and feel of the area,” and Economic Development Director for the city of Peoria Craig Hullinger said he agreed.
“We’re trying to get that Main Street corridor redeveloped,” he said. “It will bring more people, more shopping and more vitality. It will bring the university area back toward downtown.”
The petition submitted to the City Council noted that neighborhood concerns included light and noise from the pool area, increased traffic through the neighborhood and a loss of privacy. It also said some were concerned about the number of variances in zoning laws requested by the developer.
However, Smith said the variances were granted and had to do with relatively minor architectural issues. The approvals were also granted on the condition that the developer adhere to other strict standards, including replacing deteriorated sidewalks and curbs near the project site, according to the petition to the City Council.
Senior nursing major Evan Prokuski, who lives on Underhill across from where the pool, pool house and  parking lot will be built, said the development will be a positive change in the area, but still had some concerns.
“I’m glad they’re doing something with that old Walgreens,” he said. “As long as construction of the project doesn’t impede my lifestyle, it sounds good.”
Junior  psychology major Heather Lucenti said Main Street Commons will likely make Bradley more appealing to prospective students, especially with the inclusion of the pool.
Lucenti also said the development would likely create a safer environment on Main Street.
“Right now, [Main] has a bad reputation,” she said.
Smith said the city is waiting on building permits from the developer, but construction will likely begin once those are approved. The Peoria Journal Star reported construction on Main Street Commons to begin in October, with a scheduled completion date of August 2010.
Calls to Devonshire Group were not returned by press time.
More from NewsMore posts in News »