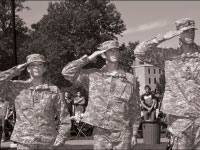 Students had the opportunity to hear a Holocaust survivor speak to celebrate Constitution Day this week.
Constitution Day has been observed since 2004 when Sen. Robert Byrd added an amendment to the Omnibus spending bill that created Constitution Day, also known as Citizenship Day. The holiday recognizes the ratification of the United States Constitution and is commemorated nationwide every September 17.
Interim Executive Director of the Center for Student Support Services Barbara Carraway said the bill mandates all federally funded schools to acknowledge the day.
“Most of the time schools have a speaker, but here at Bradley we do a little more,” she said.
Past events have included musical entertainment by the Bradley Symphonic Winds and the Bradley Chorale, presentations by the ROTC, and guest speakers such as Lt. Col. Ray Hart, professor of Military Science at Illinois State University and Bradley.
Bradley celebrated Constitution Day from 11:15 a.m. to 1:30 p.m. on Monday. Classes were either canceled or shortened and cafeterias were closed to encourage students to join the festivities on Olin Quad.
Brittany Copeland, sophomore physiology major, said although she was aware of Constitution Day, she said she thinks the event is one that should be promoted more.
“I know a lot of people who were not aware of it and people ended up finding out the last minute. If more students were aware of it earlier students can participate in the activities they had on campus,” she said.
Sophomore AEP major Symone Buckner said she would like to see flyers posted around campus next year.
“I didn’t even know we had it. I didn’t know it existed,” she said.
Although Buckner didn’t attend the event she said Constitution Day is still important to her.
“Our forefathers worked very hard to establish this country and there is no shame in acknowledging them [and] what they’ve done,” she said.
Carraway said she also agrees Constitution Day is important and that it is a day to appreciate the significance of the Constitution as well as “protecting and defending our liberties.”
Buckner said she admires the freedom we get from our government.
“We can practice any religion that we want, we have the freedom to say what we want, and we do not have to be in fear – people come to this country just for that,” Buckner said.
More from NewsMore posts in News »