Construction makes its way onto the quad 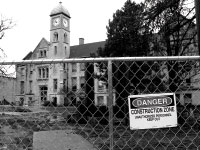 Recently, foot traffic on campus has had a few speed bumps to navigate around.
Construction is in full swing and fences around Westlake Hall are a major clue that one of the oldest buildings on campus is getting a much-needed face lift.
Westlake, which houses both the education and educational leadership and human development departments, is scheduled to be under construction for about two and a half years, Facilities Planning Supervisor Kim Green said.
Although changes to the facade of the building are not yet obvious to people walking by the fenced-off area in front of Westlake, Green said work began several weeks ago.
“The underground utility work began the first of March,” she said. “The earliest start for the next package will be late summer or early fall of this year.”
That means students who normally take classes in Westlake will have to be temporarily relocated during the next phases of construction.
Students are already aware classes will be moving into the spaces in Campustown previously occupied by Blockbuster and Save-a-Lot.
Junior elementary education major Michelle Anklam said the move has caused concerns among some students.
“I’m just worried that we won’t have the resources, like technology, that we need to conduct our classes,” she said. “I’m trying to stay optimistic about it and make the most out of the building changes because I believe it’s easier than stressing over it when we don’t know much about it yet.”
However, student concerns about the majority of classes being moved to Campustown are unfounded, Dean of Education Joan Sattler said.
“Most classes of the college and the two departments are currently held in other buildings on campus, such as Bradley Hall and Burgess Hall,” she said. “They will continue to be held in other buildings until the Westlake Hall renovation is complete. We will have four classrooms in the Campustown temporary facility.”
Renovations of the Campustown buildings are underway and the spaces are expected to be ready for student use by the first day of classes in August.
Anklam said the construction on Westlake has become a lot more noticeable since students have returned from Spring Break.
“At times, we feel the building shake because of everything that’s been happening right outside,” she said.
The renovations will be extremely helpful for future students, Anklam said, and she said she is excited for the updates, even though she won’t be around to see the finished product.
“Right now, the building does not have the resources that it should have to help us learn,” she said. “The temperature is never comfortable and little things, like only having one bathroom in the basement, is very inconvenient for us. I’m glad that they noticed that the building does in fact need renovations, and I’m happy that they’ve finally started working on it.”
The construction will update more than just amenities, Green said.
“The new building will have a combination of several teaching environments from mediated classrooms to laboratory space,” she said. “In addition, an auditorium will be added. Roughly 15 new teaching spaces will be available in the facility.”
Faculty members also must move out of their offices by the end of July, and only a portion of summer classes will be held in the building, Sattler said.
Summer Session I classes will be held in Westlake but those in Summer Session II will be relocated to other buildings on campus.
More from NewsMore posts in News »