Dance off not end to Easter Seals fundraising 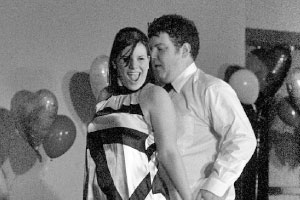 Nine couples competed in eight dance categories to raise money last Friday.
This year’s “Do You Want to Dance for Easter Seals?”competition featured a range of dancers from swing to hip-hop to tap dance.
The event, that raised money for Easter Seals of Peoria, was hosted by Bradley Fellows and the Lewis J. Burger Center for Student Leadership and Public Service.
The audience consisted of many Bradley students, their siblings and some families from the community. The Director of the Lewis J. Burger Center Sara O’Shea said she was happy with this year’s turnout.
“This year, we had a bigger group of siblings, but the support from the campus and the community was similar to past years,” she said.
After about 45 minutes of different dancers performing swing, contemporary, jazz, line dancing and a Broadway performance, the three judges tallied up votes. The audience was able to vote for their favorites by purchasing tickets for $1 each.
Also, between performances a music video montage showed the children the fundraiser would benefit.
The contestants were competing for the opportunity to perform on the Easter Seals telethon. The dancers who win at the telethon will also win a $250 prize and a trophy.
One of the competitors said she participated this year to have fun and not necessarily to win.
“I’ve been helping out at this event since I’ve been in Fellows which is about three years,” senior political science major Emily Gesing said. “I always said I would compete, and this year I finally did.”
Gesing said she and her dance partner combined tap dancing and hip-hop into a sort of battle.
“We came up for the idea because I don’t know how to do hip-hop and my partner doesn’t know how to tap dance,” she said. “So we choreographed it for both of us.”
After the judges made their final decision the finalists were announced. Third place went to Kirsten Palmer and Cortney Dammeier for their jazz dance. Second place was awarded to Melanie Pagan and Jacob Cuevas for their Latin dance.
And the People’s Choice couple chosen to go onto the telethon had the highest amount of tickets from the audience. The winners were Ben Koch and Rheanna Nance for their rendition of “Single Ladies” by Beyonce.
Koch said he participated in the event this year to help out the children of Easter Seals.
“I visit Easter Seals and help out there a lot so if I can help them by shaking my groove thang I’m willing to do it,” he said. “We never expected to win and we’re just really excited to raise more money at the telethon.”
Jacob Cuevas, another part of the group performing on the Telethon, said he was not at all expecting to go onto the television performance.
“I was shocked that they wanted us to perform again,” he said. “I thought I was going to retire the dancing shoes after Friday night, but I’m definitely up for it again. In all, it’s been a really fun and worthwhile experience.”
Overall, O’Shea said Fellows raised an estimate of about $500 from the dance event alone. The telethon campaign will add to this amount. The show is set to broadcast live from 6 to 11 p.m. on March 7 on WMBD channel 31.
Also, some of the dances from past years, as well as the People’s Choice from this year, can be seen on Youtube by typing “Bradley University Easter Seals” into the search bar.
More from NewsMore posts in News »