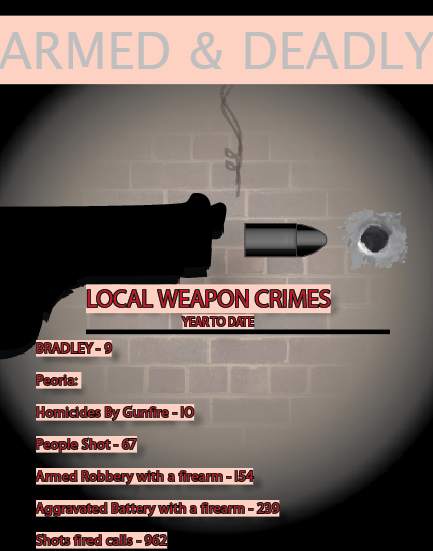 More than 50 deaths and 65 injuries in Peoria over the past five years have been due to gun violence. In an effort to take a new look at those crimes–and those who caused them–Peoria is engaging in the Don’t Shoot initiative.

The program kicked off in Peoria this summer, but it was piloted in Boston, where the youth homicide rate dropped 66 percent following its launch. It is based off a book by David M. Kennedy, who visited Peoria this summer to discuss the program.

Lt. Michael Eddlemon is part of the Special Investigations Division with the Peoria Police Department. He said the initiative establishes choices and expectations for gun crime offenders at a variety of levels.

“Either they can decide they want to get involved with services like education, housing or job training, or, if they keep living like they are living, punishment. And finally, they can choose community involvement. And we will assist them in that choice with the resources we have available, whatever it may be.”

Eddlemon said a lot of the gun crimes coincide with drug use.

“Drug dealing and drug abuse without gun violence is basically the suburbs,” he said.

The time is right to bring Don’t Shoot to Peoria, said Eddlemon.

“I think what we have been doing hasn’t worked, and is similar to playing whack-a-mole,” he said. “Now we have the means, the talent and the partnerships with others. It is going to require daily maintenance, logistical operations and people working together, and hopefully it will become a well-oiled machine.”

While Bradley police are not directly involved with the program, Eddlemon said, they are aware to keep a lookout.

“We included them in a list of offenders who, once targeted, won’t receive any lenience,” he said.

According to Eddlemon the Bradley campus is safe overall, but it doesn’t hurt to stay vigilant.

“If you go a few blocks in any direction, obviously there are concerns,” he said. “It depends on the circumstances. If you have an area with a lot of people from out of town, there is a predator/prey situation. It’s a nice school, and some people walking around there have more in their pockets than others see in a week.”

And, as always, heed the cautionary advice that the police give, Eddlemon said.

“Travel in at least pairs, if not groups,” he said. “The best way to handle being robbed is to give them what they want as far as items go. Throw your stuff one way and go the other way. But never go with them, if they want you to. It becomes very difficult to find you then. Always listen to that inner voice.”

Eddlemon said the program is in its infancy, but he said he believes it will help lessen gun violence.

“Our first priority is violence, and it doesn’t have to be a gang. If it’s a person, then we will target them,” he said. “This has worked in other communities, like High Point, N.C. What we ultimately want is for people to stop shooting and killing each other.”