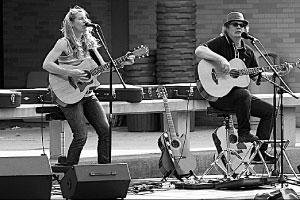 In honor of Earth Day, the Student Environmental Action Coalition, a group dedicated to improving Bradley’s recycling program and raising environmental awareness, hosted Earth Day Extravaganza last Friday afternoon on Olin Quad.
“The Student Environmental Action Coalition, or SEAC, has an annual Earth Day concert, and last year we tried an organic picnic,” SEAC president Alyson Jordan said. “Both events were huge successes, so we decided to combine them into one large event.”
In order to inform students about the types of great tasting organic foods they can buy at stores they often shop at, SEAC offered students the opportunity to taste a number of different types of cereals and granola bars, as well as other organic foods.
There was also a table where students could make their own tie-dye shirts.
All of the organic food samples, as well as the tie-dyed shirts, were free.
Throughout the event there were live musical performances by local artists such as Patchouli, Aaron Cummings & Alex Brouwer, Jared Bartman and Jake Van Hoorn & Friends.
“I just hope students were able to take advantage of the free entertainment and food,” SEAC member Jessica Dobson said.
Interested students also had the opportunity to visit tables set up by local environmental groups, who were more than happy to share information about the environment with students.
SEAC had its own table set up to inform students about the Carbon Neutral Campus Campaign, a campaign currently taking place in hundreds of colleges and universities across the country, as well as at Bradley.
“It is very important for Bradley students to recognize ways to be eco-friendly,” Jordan said.
However, junior English major Emily Wieser thinks the event should have been advertised more.
“I didn’t know there was an event until it was almost over,” she said. “I would have liked to come by earlier to listen to the music. If there had been more advertising, I probably would have gone sooner.”
Sophomore English and electronic media major Afton Hallauer said she agreed.
“I didn’t see any advertising for that event,” she said. “I would have really liked to have gone to it though. I just didn’t know it existed. It sounds like it was a really good idea though.”
Freshman studio art major Damon Taylor said he thought the event was a good idea, but perhaps could have focused on different ways to be eco-friendly.
“I think organic food isn’t overly important when considering things that are eco-friendly,” he said. “Maybe there could have been a bigger focus on things like recycling and finding alternative energy sources rather than organic foods.”
More from NewsMore posts in News »