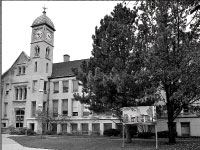 With the $22 million expansion of Westlake Hall beginning next summer, new classroom and office locations during construction are in question.
Joan Sattler, dean of the College of Education and Health Sciences, said classes will have to be relocated during the approximately two-year long renovation.
By next summer, faculty and administrators will be moving to Haussler Hall for the duration of the major Westlake construction.
“Once Athletic Department administrators now occupying Haussler Hall move into the Puterbaugh Athletic Performance Center, the College of Education and Health Science will be able to temporarily relocate into Haussler,” Sattler said. “We don’t have details yet as to the exact timing of our move, pending completion of the athletic performance center. Because one event is dependent on another, it is too early to know the timing of all of the moves.”
Another obstacle for the Westlake relocation is available space.
“Classroom space is at a premium on campus, so finding open classes is always a challenge,” Sattler said. “This is just one of the challenges we will face and overcome.”
While classes for the departments of teacher education and educational leadership and human developments are already held in other campus facilities, Sattler said there are still a significant amount of classes in need of new locations.
“For example, our science education lab and our group and individual counseling labs that are used by master’s-level counselors will need appropriate spaces,” she said.
For some of the students who attend classes in Westlake Hall, the classroom move will be a slight hindrance.
“Westlake is so convenient because all of my education classes are in one spot,” said junior elementary education major Kris Nickolas. “It won’t be a huge problem having to go to other buildings on campus, but it was just easy having everything in the same building.”
For freshman elementary education major Jen Cepko, relocated classes will be a simple adjustment.
“It won’t be that much of an inconvenience because our campus is so small,” she said. “It was just nice having one building where I could be in the same area as all of my education teachers and peers.”
Lindsey DeSmith, junior math and secondary education major, said she thinks the construction won’t affect students as much as teachers.
“As far as moving classrooms, the students won’t have a difficult time adjusting because we already have to go to other buildings for some education classes,” she said. “It will be the most inconvenient for professors because they will have to go from Haussler to their classes carrying all of their supplies with them.”
Despite the obstacles, students believe it’s time for a change.
“To me, Westlake is built like an old schoolhouse,” DeSmith said. “It’s still the same building it was 50 years ago, and the renovations will be nice. However, I am so glad they’re just adding on, so they can save the original building.”
Sattler said when all construction is completed, classes will move back into the new classrooms and laboratories as soon as possible. However, an end date for construction is still unknown.
“Construction is expected to take at least two years,” Sattler said. “But a precise timetable of the expansion and remodeling project hasn’t been determined.”
More from NewsMore posts in News »