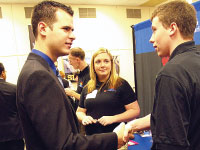 About 77 employers attended the 2010 Spring Job & Internship Fair on Thursday, a slight drop from the Fall Job Fair’s attendance of 80 employers.

But the career center hosted the Government, Green, Recreation and Social Service Fair on Wednesday, with about 50 other employers in attendance, making a total of 130 employers visiting campus in two days. Executive Director of the Smith Career Center Jane Linnenburger said this amount is typical of job fair attendance in the past.

“We’re very pleased,” she said. “It’s a strong indicator of what the marketplace thinks about Bradley candidates – they like the skill sets students have.”

About 830 students attended the two fairs, with 670 at the Spring Job Fair.

Roughly 840 students attended last semester’s job fair, but some said they were met with employers who weren’t hiring amidst the struggling economy.

But at the spring fair, companies were actively seeking employees, which injected optimism among students and career center staff.

“The companies have a little more confidence in what’s going on, which impacts hiring,” Director of Career Development for the Smith Career Center Rick Smith said.

Some companies were seeking interns only, while others were hiring for full-time positions or a mix of the two. Internship positions are a “good sign,” Smith said.

“It shows there are opportunities, there are short-term projects,” he said. “It could lead to full time.”

IBM Team Lead Paul Amador said the company has 1,300 positions to fill at the company’s new center in Iowa and has been actively recruiting at colleges, but chose to come to Bradley because of the school’s computer information systems program.

Caterpillar, Inc. was recruiting at the fair, unlike the Fall Job Fair.

“The global economy has started to solidify in specific regions where growth is coming back and the inventory ‘bullwhip’ has run through its cycle,” Jake Lyon, who works in the purchasing department at Cat, said. “This created the need to refill the pipeline for standard demand in specific areas that are starting to re-emerge.”

But others, like junior organizational communication major Nikolas Levin, said they came for the experience.

“I just like to network and meet as many people as possible,” Levin said.