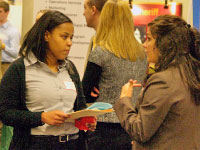 Jane Linnenburger has been around Bradley long enough to remember the last job market downturn. As the executive director of the Smith Career Center, she has witnessed countless graduates get jobs and has counseled many more.
But it may be more difficult to advise seniors who are trying to get jobs in an economy boasting the lowest unemployment rate since 1993.
“Plan to go to grad school,” Linnenburger said.
She said many companies are taking “wait-and-see” approaches, and they will be able to respond to any changes in the job market that come about as a result of President Barack Obama’s policy changes.
This was the case for many companies that attended the Spring Job and Internship Fair on Wednesday.
Ninety-three employers attended the job fair, a number that is consistent with past years.
However,  fewer companies offered on-campus interviews than last year, and Linnenburger said it’s difficult to know how many companies are hiring right now.
“What we’ve been hearing is most companies have revised their hiring goals for the year,” she said. “Usually they would set their goals for the year which would include hiring through June, and because of the recent economy have revised those goals.”
Aubrey Doering, the corporate recruiting manager for Morton Building, Inc.,  said she thinks students might have to struggle to find suitable jobs with the current job market.
“Employers have to watch out for those who want a job and aren’t going to stay awhile,” she said. “Some people might leave once the market picks up.”
She said Morton Building is delaying its hiring until the summer because the company doesn’t want to hire people who may be laid off later.
“We’re doing just as well as last year,” Doering said. “We’re just being cautious because we don’t know what’s going to happen.”
Derek Glenzinski, the business development director for ConAgra Foods, said the company has hired four Bradley graduates for full-time positions and internships. He said the company’s job opportunities are increasing, but minimally.
“Companies like ConAgra are typically more recession-proof,” he said. “While the economy might be down, people still eat.”
Glenzinski said there are still some good opportunities for students, but there aren’t as many right now.
“We have more people looking for the same jobs, so Bradley students have to be sharper and do their homework,” he said.
Caterpillar Inc. attended the fair, although a sign on the company’s table read that CAT is not hiring at this time.
“We’re here to let people know CAT is still here and to continue to have a presence on campus,” Fred Dock, a manufacturing engineer at CAT, said. “And to answer questions people have right now. It’s an emotional time with people not understanding what’s going on.”
He said CAT is collecting resumes and looking at them.
“If and when in the future things open up, we’ll have a pool of candidates to choose from,” he said.
However, Dock said he doesn’t know when CAT will start hiring again.
Although some companies may be scaling down on employees, senior electronic media major Eric Dorner said he thinks he will be able to get a job when he graduates.
“I have a lot of contacts that are looking for me to contact them closer to graduation,” he said.
Louis Deli, a recruiter for Discover Financial Services, said the company is mostly looking for interns right now.
“There is not a lot open right now,” he said. “We’re being cautious in the economy.”
He said internship positions could turn into full-time positions, but there are no guarantees.
Senior international business major Aly Miller said she is looking for an internship right now, and she thinks there is a better opportunity to get an internship than a full-time job.
“I am confident I will get an internship because I have so many opportunities with my major,” she said.
Russell Schaffer, the senior communications manager at Kaplan Test Prep and Admissions, said more students are looking to attend graduate school “as a safe haven to wait out unemployment uncertainty.”
“Whenever there’s economic or unemployment uncertainty people are inspired to re-evaluate their career paths, and they look at graduate school,” Schaffer said.
He said Kaplan has witnessed a double-digit increase in interest in business, law and graduate test prep courses. More students are taking sample classes, admissions seminars and registering for free events.
More from NewsMore posts in News »