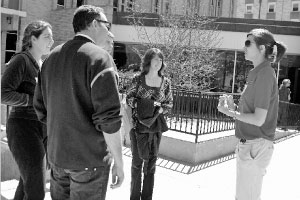 The economy has affected the numbers of next year’s freshmen class, but administrators remain optimistic about the class of 2013.
The number of high school seniors who’ve made tuition deposits is lower than usual, and Vice President for Student Affairs Alan Galsky said this is because of many families’ unsteady economic situations.
Prospective students and their families seem to be hesitant to commit to any school, and are waiting a long time to do so, Galsky said. But in the past few weeks, Bradley has seen some of those students make deposits.
“We needed to start seeing some indication that these late decision makers were going to decide to come to Bradley,” he said. “And … we’re beginning to see, as of two weeks ago, that we’re getting our fair share of those students.”
As of Monday, Bradley had received 762 deposits, which means many of those prospective students will likely end up coming to Bradley. However, the goal set for the class of 2013 was 1,080, so Galsky said he’s optimistic, but realizes the university may come up a little short.
“On the high side of it, I think we could see 1,100 students,” he said. “On the low side, we could see about 1,000.”
While 100 students may not seem like too large a number, it can make a big difference.
For this school year, the cost to attend Bradley without any financial assistance was $30,164. By having 100 less students, the university could lose out on as much as $3 million.
Galsky said because Bradley’s tuition is lower than more elite schools, some students admitted to both those schools and Bradley, have chosen Bradley.
“We would be at an advantage in this economy between students deciding between say Northwestern University or Washington University [in St. Louis] and Bradley,” he said. “Because their tuition is almost twice ours, a family in this economy may not be able to afford to send their son or daughter there, so Bradley would be an … alternative.”
Galsky said even though the goal for the incoming freshmen class might not be met, current students wouldn’t see any additional cost-cutting strategies in place. However, should the number of students stay at less than 1,000 or so, the university will have to tighten its purse strings in certain areas.
“In the 1980s we had to suffer through low enrollment numbers,” he said. “We would have to freeze salaries, maybe force early retirement, basically what [Caterpillar Inc.] is doing.”
But as long as the current depositing trend continues to increase, which Galsky expects it will, the university won’t have to resort to those measures.
“If we didn’t receive another deposit, then we’d have problems,” he said. “But we are getting our fair share of the late decision makers.”
This year, the admissions department and Galsky’s office have also changed the way the university admits prospective students.
About 4,530 students have been admitted, which is a record number. That is of the 6,140 students who applied, also a record.
Galsky said the quality of students being admitted isn’t being lowered even though there are more of them, but the process is being improved.
“In the past, we would hold off on telling students they were admitted until the second semester,” he said. “The problem with that is by the time we told them they could come here, they’d already decided to go somewhere else.”
Another new idea put into practice this year is micro-goals. Bradley always has a macro-goal, which is the number of students that need to come here, but the micro ones are new.
Examples of those goals are increasing the number of students from the 600 zip codes, increasing the number of students from the coasts, increasing sports communication, nursing, university and AEP majors.
With the exception of additional students from the East and West coasts, Galsky said the university’s goals should be met. And the only reason that goal won’t be met is because of the economy, he said.
More from NewsMore posts in News »