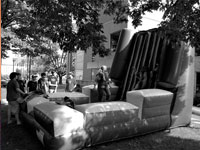 To keep potential sorority members interested, the Panhellenic Council hosted a Campus Carnival last weekend.
The carnival was introduced as a way of acquainting new students further with the Bradley campus and the greek system.
“The carnival was an idea the Panhellenic and Interfraternity councils came up with,” Trisha Koors, the Panhel president said. “We thought it would make a great event, so we submitted the proposal to the Student Activities Budget Review Committee and received funding for five
inflatables.”
There were five different types of inflatables, including a jousting set, Twister game, a seven-element obstacle course, a Velcro wall and a bungee run, Koors said.
“The funding also allowed for a cotton candy machine,” she said. “To complement the cotton candy, there was a small selection of food at the event, including snow cones, popcorn and pizza.”
There were also several other activities to participate in at the carnival, including a mocktail competition.
“The sororities participated in a mocktail competition where they made imitation cocktails,” she said. “They were all able to make unique drinks for people to try as they hung out on the quad.”
Sophomore mathematics major Lauren Cuddy said her sorority, Kappa Delta, participated in the mocktail competition and won.
“We put in a lot of work and spent time experimenting on recipes,” she said. “In the end it was worth it because we won $200 for the philanthropy of our choice, the Children’s Hospital.”
Although this is the first year the carnival has been hosted, the idea for it has been around for much longer.
“This carnival has been in the works since last year,” Director of Recruitment Jade Peters said. “This year we were given the perfect opportunity to put the event right in the middle of greek recruitment to keep potential new members excited. It was great to be able to get the rest of the campus involved as well.”
Cuddy said she thought the timing of the carnival was a great idea.
“It’s a nice way to remind girls to continue to go through recruitment and hopefully persuade them to join a house,” she said.
Koors said there was a very high turnout at the event and they received a lot of positive feedback during and after the event.
“Everything seemed to be very popular, and those who I talked to really enjoyed the time they spent at the carnival,” she said. “Students also seemed to really enjoy the fact that it was a free event on a Saturday afternoon that went through the evening. Because of this, we definitely believe the event was a success, and we look forward to resubmitting the event for future semesters.”
More from NewsMore posts in News »