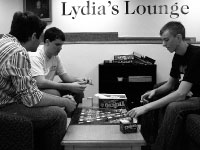 The option to eat late on weekend nights at Lydia’s Lounge is set to change, Student Body President Jordan Ticaric said.
The current hours for anyone who has a late night appetite are Friday, Saturday and Sunday from 8 p.m. to midnight.
Next semester, food will only be served until 11:30 p.m. to accommodate those who serve the food.
“The [Family and Consumer Science] students who help prepare and serve the food were originally told that they would be able to leave Lydia’s Lounge at 12 a.m.,” Ticaric said. “Now they get out at 12:30 because they are serving food until midnight.”
Ticaric said she does not want students to not get something they were promised, even though the change represents only a 30-minute difference.
“We have been advertising these hours to the students for so long,” she said. “Some of them might be counting on it.”
Student Senate does not want the hours to change because there are not enough late-night options on campus, Ticaric said.
“They thought they were going to be able to get food until midnight,” she said. “And now it is changing.”
Sophomore accounting major Lindsay Vaught said she thinks the hours should remain the same.
“Lydia’s Lounge is a really convenient place for students to go when they’re hungry late at night,” she said. “I think it’d be OK to close it early on Sunday nights, but on Friday and Saturday nights people like to eat late.”
Ticaric also said she did not want this to be the beginning of an ongoing compromise between the FCS students and the students coming in late looking for food.
“I realize that the volume of people who come in late is not that big,” she said. “But I don’t want this to turn into a situation where the hours down the line get shortened even more.”
Typically, Lydia’s Lounge is busiest late at night when there is an event going on, Ticaric said
“But it is not necessarily about volume,” she said. “It is about convenience. There may not be 400 students standing in line for food at 11:45 p.m., but it’s that one person who is starving at 11:50 p.m. Why can’t they get food when they thought they were going to?”
Vaught said she went to Lydia’s Lounge on a Sunday night and thought it was doing well.
“There was enough people there to have a line of students waiting for food, and that was on a Sunday,” she said. “Keeping it open until midnight doesn’t seem like it would be too difficult.”
More from NewsMore posts in News »