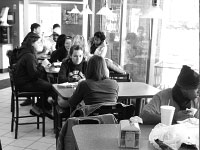 After Spring Break, Center Court will be open until midnight Monday through Thursday, allowing students more food options on campus at night.
“Having food services available at night will hopefully be a safer way for students to get food so they aren’t walking off campus,” Student Senate Campus Affairs Committee Chairperson James Lombard said. “Center Court gives students the opportunity to either eat inside or on the patio, which made Center Court the most appealing place to extend food service hours on campus.”
The increase in hours will be in effect until the end of the semester, and if interest is high enough, it may continue through next semester, Director of Campus Dining Services Ron Gibson said.
Lombard said because of the longer hours, more staff will definitely be needed to run Center Court.
“Hopefully with the longer hours, we will be able to see some job opportunities available for students,” he said.
Gibson said Food Services will be hiring five or six new employees to cover the new hours, but he did not say if students will be hired.
The change in hours at Center Court is a response from a request from Student Senate and ARH, Gibson said.
“I have had a lot of concerns from students that there are no food options available on campus at night,” Lombard said. “From being on Student Senate the last two years, the concern has come up more than a few times. As the Campus Affairs Chairman, I saw this as a great opportunity to help voice the students’ opinions.”
Lombard and his committee met with Gibson last week to get the final confirmation that Center Court’s hours will change.
“At this meeting we came up with an idea to have some sort of social gathering outside Center Court to advertise the new hours,” he said. “The event will probably be the first Thursday back from Spring Break, but it really depends on the weather and if we can get everything set up by then.”
A few weeks after the new hours have been put in place, Student Senate will send out a survey to students to see what they think of the new hours, Lombard said.
“At the meeting, we also brought up the idea of having extended hours at Center Court from Spring Break until Thanksgiving Break and then switch to Lydia’s Lounge from Thanksgiving Break to Spring Break,” he said. “This will be decided by the student body and the survey Student Senate sends out later this semester.”
More from NewsMore posts in News »