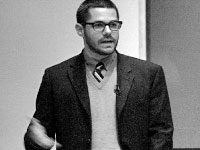 When former MTV news correspondent Gideon Yago took the Neumiller Hall stage Wednesday night, girls in the audience went giddy with delight.
But “teen television’s bespectacled face boy” offered up more than good looks in his lecture, “They’re doing WHAT? Politics and the Youth Vote,” as part of the Robison Lecture series sponsored by the Department of Communication.
Starting in 2000 at MTV, Yago said he wasn’t political by nature.
He said in the 1996 election, the first time he was able to vote, he wrote in Ken Griffey, Jr. on the ballot.
“I thought my vote didn’t matter,” he said.
But through his seven years as an MTV journalist, he said he defined his career by politics and the youth vote.
“[It’s] you guys and Washington, D.C., you guys and the election, you guys and politics,” Yago said.
His overall message to students was to continue to make the youth vote a loud and clear voice in politics, which is possible because of the sheer size of the ages 17 to 27 demographic today.
Yago said when he started his career in 2000, the country “stood on the doorstep” of some startling new trends.
First, Yago said young people were walking away from politics in greater numbers than ever before, which meant a crisis for the perpetuation of democracy.
Yago also said the trend of young people abandoning traditional media for alternative news sources such as “The Daily Show with Jon Stewart” and “Saturday Night Live” had an effect.
“The media doesn’t reflect you or position you in the story as a result,” Yago said. “… You walk away from them, they walk away from you.”
And Yago said the huge size of the younger demographic in the United States today should be enough for both the media and politicians to take notice. One out of every four people in the country is between 17 and 27.
But Yago said there seems to be a “vacuum” around young people when it comes to mobilizing political power, which could be because of voter apathy.
“The lack of identification with politicians creates negative feedback,” he said.
Young people don’t donate huge amounts to campaigns and don’t turn out strong in the polls, so politicians don’t take time and money to secure the youth vote. And Yago said this shows in previous elections’ voting turnout results.
The 1996 election Yago first participated in as a voter is an example of this ignorance of the youth vote, he said. Poll numbers for young people were low, and it was a “crisis in democracy.”
But his work and MTV’s work in trying to mobilize voters with campaigns like Rock the Vote and Choose or Lose hoped to repair these ideas, he said. MTV began providing “crib notes” of political discussions to keep viewers updated.
“If you don’t know the significance of a breaking news piece or a VP choice … it’s all Greek to you, and we provide that Rosetta Stone,” Yago said.
A major influencing factor in encouraging young people to be involved in politics came with the Sept. 11 tragedy, Yago said.
He described riding the subway to a little more than 100 yards from what is now called Ground Zero and hearing the first tower fall. The challenge for Yago that day was to explain a national tragedy to a huge number of young people.
The events of 9/11 were a watershed moment for young people today, Yago said, and this meant it would be a watershed year for the 2004 election. MTV launched a campaign to get 20 million youth voters to the polls on Election Day.
“Our hope was that having a showing of 20 million young people … would be undeniably impossible to ignore,” he said.
The 2004 election resulted in a showing of the largest amount of young voters since 1964, and he said he hopes the trend continues this year. It may, as polls indicate a 109-percent increase in young voter turnout at primaries and caucuses, meaning this year’s election may be the highest voter participation in an election.
Yago said today’s young people have unique challenges to consider, including threats of terrorism, a huge national debt, the deterioration of the Social Security system, rising costs of education and an increasingly bad job market.
But young people should use these challenges to their advantages and mobilize their generation for change.
“I hope that you will prove to be the greatest generation as your numbers [and] blessings offer,” Yago said. “But that is up to you.”
More from NewsMore posts in News »