Former student back in court for sentencing 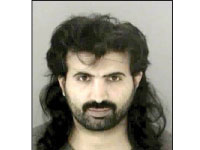 Bradley alumnus Ali Saleh Kahlah al-Marri began his sentencing hearing in Downtown Peoria on Wednesday.
Al-Marri was indicted earlier this year on charges that he conspired to help al-Qaida while he was studying at Bradley. The charges also state he plotted to lead a second major attack on the United States.
Al-Marri allegedly plotted the attack from July 2001 to December 2001 while getting his master’s degree in computer science.
At the time of his arrest, al-Marri had files on his computer relating to the use of poisons and chemical weapons, as well as photos and videos of Osama bin Laden, according to the Journal Star.
After being arrested in December 2001, federal officials charged him with credit card fraud, claiming he was in possession of more than 1,000 credit card numbers.
The hearing was held at the U.S. District courthouse.
Government lawyers want al-Marri to receive the maximum 15 years.
Prosecutors wrote in court documents that al-Marri “was fully aware of the nature of al Qaeda’s violent philosophy against the United States and their ability to inflict mass casualties. He agreed to the mission knowing that it would be in furtherance of that agenda.”
Al-Marri’s lawyers are urging the judge to consider the 5 1/2 years al-Marri has spent in military custody and want their client to be released as soon as possible.
“We’re arguing that warrants a lower sentence,” attorney Lawrence Lustberg told AP Monday. “The best possible outcome would be that the court would conclude that no additional term is necessary.”
Al-Marri admitted he trained in al-Qaida camps and stayed in al-Qaida safe houses in Pakistan between 1998 and 2001, learning how to handle weapons and communicate by phone and e-mail using code.
He also acknowledged having regular contact with the man who the government said was the mastermind behind the Sept. 11 attacks, and the man who allegedly helped the Sept. 11 hijackers with money and Western-style clothing.
In 2003, President Bush declared al-Marri an enemy combatant, one of three held on U.S. soil since the 2001 attacks.
After the U.S. Supreme Court agreed in December 2008 to consider al-Marri’s challenge of his enemy combatant status, President Barack Obama ordered him surrendered to civilian authorities in Peoria.
Results of the trial are expected today.
More from NewsMore posts in News »