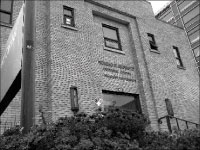 In a campaign started last year by the Student Senate Diversity Committee, renovations to the Garrett Center have begun.
Student Body Vice President Ben Koch said the committee has several specific hopes for the center.
“We have a six-point plan,” he said. “We want to redo the walls, floors, chairs, [add] computer chairs, doors and the entranceway. We want to make it more inviting and show the university’s pride in multiculturalism.”
One of the six points has already been completed.
“We’ve received new chairs for the main floor of the Garrett Center,” Senate Diversity Committee Chairwoman Trisha Koors said. “The chairs were paid for by a grant from the Parent Board.”
Koch said he is hoping the university will fund the remaining renovations, and he is working with Vice President for Student Affairs Alan Galsky and the Facilities Management Department to find a plan.
Koors also said the university will be putting in new walls and floors by the end of Winter Break.
She said she thinks the changes are being made in a timely manner.
“I would like to see everything else done by the end of the year,” she said. “Right now, the walls and floors don’t look very impressive to anyone who uses the Garrett Center, and they just look kind of shabby.”
Koch also said funding the changes to the Garrett Center is important for all students, and the university as a whole.
“The Garrett Center has been a staple on Bradley’s campus since the creation of multicultural student services,” he said. “The Garrett Center has been a place that represents multicultural students. This project is essential because those students are as important as every other student, their voices need to be heard and they need a place where they can go. All the different services [the Garrett Center offers] apply to multicultural students and all other students. It’s important to promote diversity on campus.”
Koch said the center is used for a variety of purposes, but especially for those relating to multicultural and international students.
“One of the first things is that Multicultural Services are in the Garrett Center,” he said. “That’s where they plan multicultural events and where [Multicultural Services] hosts orientations for multicultural and international students.”
Koch also said the building has areas all students can use, including computer labs and meeting rooms.
“The main floor is a really nice open space that is available for longer hours than other places on campus, such as Lydia’s Lounge or the student center. It’s just a resource for all students.”
The university purchased the Garrett Center in 1980 from the Faith Tabernacle Church. It houses the Office of Multicultural Student Services, which, according its Web site, assists students of color and international students reach their full potential.
More from NewsMore posts in News »