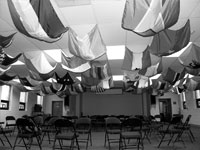 New improvements are being made to the Romeo B. Garrett Cultural Center this week.
The renovations to the center started on Aug. 26th. Renovations did not start earlier due to the fact the auditorium was being used for events held during Welcome Week.
irector of Multicultural Student Services Frances Jones said working in the center for 12 years has shown her what changes needed to be made to the building.
She comprised a list of goals for the renovation of the center. With the help of Ron Doerzaph, director of facilities management, and Gloria Arrington, general services supervisor, Jones said she has been able to reach her goals for the center.
“I think that it is wonderful for the Garrett Cultural Center to have a new look for the fall 2009 semester,” she said.
Renovations have only been made on the first floor. New carpets and flooring have been installed to the auditorium and to the staircase leading to the second floor. The walls have also been painted to create a bright and warm atmosphere to the center, Jones said. New tile flooring has also been added to the auditorium and foyer.
Senior criminal justice and sociology major Api Mudoh said she believes the new changes are a great idea.
“The Garrett Center has been living in the past and it’s nice they are updating it,” she said.
Senior elementary education major Debrell Young said she agrees the changes are a nice touch to the center. However, she said having to use an alternate route to enter the building has been a hassle for her.
“I was looking forward to using the front door, but I saw a sign that said I had to use the side door instead,” she said.
The front doors have been reopened this week for students to enter through.
Although the changes are occurring during her final year at Bradley, Mudoh said she is glad she is able to see the changes despite the fact that she will only be able to enjoy them for a short time.
“I’m just glad to be around when new things are happening,” she said.
Mudoh said she plans on using the center more after the renovations are completed.
Jones said she plans to have the second floor receive an update, in addition to the first floor, starting with the computer lab.
After the completions to the renovations of the first and second floor have been made, Jones said she hopes to continue making improvements to the center. One of her future goals is to widen the doors of the front entrance to make the center more accessible for students in wheelchairs.
New chairs have been purchased under the funding from the Parents’ Board Advancement Committee. The committee gave $5,000 to the center and the money was used to purchase the new chairs and storage racks.
With the recent changes to the center, Jones said she is happy to have her goals finally be reached.
“Once they are finished,” Young said. “It’ll look even better.”
More from NewsMore posts in News »