The newly renovated Geisert cafeteria has opened to the delight of hungry students, who have made it clear it is now the favorite campus dining facility. 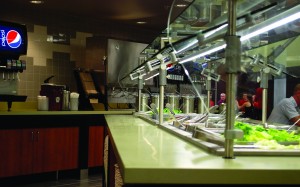 Several new food options have been added to Geisert, as well as a new chef, Gibson said.

“We just hired an executive chef to work initially at Geisert.  He’s going to branch out to the other cafeterias as well,” he said. “We have one whole area called Balanced U, which offers vegan and vegetarian meals. We don’t use butter or saturated fats in any of that food, but we do use high quality olive oil. We are trying to teach students that you can still eat well and have food that tastes good.”

“The original Geisert cafeteria was built in the ‘60s to service only Geisert,” he said. “Now, we have a restaurant-style kitchen and can store a lot more food. We used to have to get daily orders from a truck.”

Students have greeted the changes enthusiastically.

“I definitely like the improvements [in Geisert],” junior accounting major Colleen Campbell said. “I think it was completely necessary to have more seating in the cafeteria because last year it was always packed with nowhere to sit. I’ve only been there once so far this year, but I enjoyed it. I liked the food, but there weren’t as many vegetarian options as I thought there’d be.

“I think Geisert has become the cafeteria to eat at on campus,” he said. “The new menu has healthier options and overall better tasting food. Even with all the expanding done to Geisert, there is still a line out the door every day.”