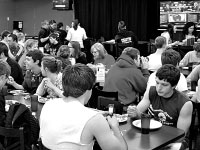 With enrollment numbers rising and limited space on campus, something has to give. Geisert  Hall cafeteria is just one location on campus that has struggled with higher popularity.
Luckily for the Geisert cafeteria staff, by the 2011-2012 school year they will be working in a completely renovated and expanded cafeteria.
Vice President for Business Affairs Gary Anna said the renovated cafeteria will create additional seating, a better service area, improved kitchen facilities and more room for food preparation.
Mary Smith, manager of Geisert cafeteria, said she would like to see the cafeteria remodeled. By expanding the whole kitchen, employees would be given more room to move and work as well as create more space to provide more food options, she said.
“It’s really jammed down here,” Smith said. “We serve 10 entrees here, which is more than Williams, but we have a smaller space to work with.”
Director of Food Services Ron Gibson said he agrees with Smith and thinks remodeling Geisert is a necessary step. He said the cafeteria currently does not provide enough freezer and pantry space to efficiently serve students.
“The storage space is small, and we have to make orders everyday because the freezers are not able to hold as much as we need,” he said. “It has outgrown itself. This is a good problem to have, it would be worse if we had too much space, but now we have to solve it.”
In the Comprehensive Report on Residential Living, committee members proposed renovation plans for the cafeteria. The report states “This renovation benefits all students living on campus, because cafeteria crowding would be addressed, the renovation would provide a better atmosphere for both current and incoming students.”
Gibson said it isn’t the first time this issue has been addressed. Several years ago, he had consulted with an architect and even drew out plans for a renovation but nothing has become of it since.
Because of the small size of the cafeteria and how heavily used the facility is, any renovations made would have to be increments, only closing off sections of the cafeteria at a time, said Gibson.
Anna said work will begin next semester, leaving the majority of the construction to be completed over winter break.
“Students will not see a change in the fall,” he said. “But it will be fully operational by the start of the 2011-12 school year.”
These plans to renovate the cafeteria will cost in the neighborhood of $750,000 or $1 million, Anna said.
More from NewsMore posts in News »