Glasser follows up with students after initial office hours 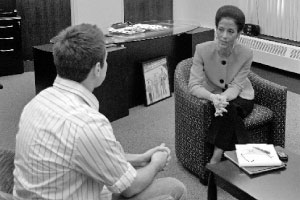 While no one is sure what effect the economy will have on university admissions, Bradley officials are optimistic and have a plan in place to meet enrollment goals.

“We’re going to make concrete efforts to do everything we can,” Vice President for Student Affairs Alan Galsky said. “Because no one can know the affect of the economy on admissions, we have to do whatever we can.”

He also said he has been meeting with administrators from the enrollment management department since last fall.

“The economy wasn’t good when we started,” Galsky said. “But we didn’t know how bad it would get.”

There is also a more organized plan in place to recruit potential freshmen.

“We know who to call and when to call them,” he said. “We know how to get the necessary information to potential students.”

According to the university’s admission numbers as of Monday, there has been a 4 percent increase in applications as well as a large increase in the number of admitted students.

And if this was what Galsky called a “normal year,” Bradley would have no problem making the goals set for the incoming freshmen class.

“A lot of people losing their jobs are … the ones who would send their kids to private school,” he said. ”That’s our marketplace.”

However, net deposits, or incoming students who have committed to Bradley by submitting tuition deposits, are down. There are 67 fewer deposits right now than there were at the same time last year, or an 18 percent difference.

But Galsky said the admission deposits aren’t really an accurate measurement because admitted students haven’t been given their financial aid awards yet. In about a month, the number of deposits will play a much larger role.

Those financial aid awards will be similar to classes before, and aren’t really affected by the economy, Galsky said.

If incoming freshmen students, or current students, find their financial aid packages aren’t sufficient, the university will work with them, Galsky said.

“We’re in a position to work with individual families to make Bradley affordable,” he said. “We know we can only learn just so much from FAFSA or from an application.”

So should an incoming or current student find their situation changes, such as a parent losing a job, Galsky said the university will try and work out a plan.

Galsky also said retention of current students is as important as the recruitment of new ones.

“We’re pleased to have one of the highest retention percentages among schools similar to Bradley,” Galsky said. “We obviously want students to stay here. And [retention percentage] is a very good indicator of whether people are satisfied with [Bradley].”

“We’re in better shape than most,” he said. “We’re not doing the best, but there are many behind us.”