Greeks dance around the world in Pan-Fra-Sing 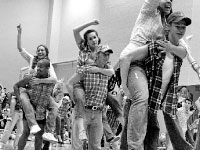 The increase in attendance at last week’s Pan-Fra-Sing already has members of Interfraternity and Panhellenic Councils thinking the event may need a new home next year.
The dance contest formerly took place in Robertson Memorial Field House, but because of its demolition, Pan-Fra-Sing took place in the Markin Family Student Recreation Center’s performance gym.
The gym is meant to seat about 200 people but many more attended, Director of Special Events Programming for IFC Brandon May said.
Entrance to the event cost $1 or the donation of a canned good or clothing item. Although there is no exact count of attendance, Director of Activities for Panhel Trisha Koors said $860, more than 200 canned goods and three boxes of clothing were collected.
These numbers show more students attended Pan-Fra-Sing this year than last year, she said.
Koors said IFC and Panhel reserved the performance gym last spring before the Markin Center was built. She said the Intramural Department wanted to keep the Markin Center’s other courts open for general student use and may not have realized how big of an event Pan-Fra-Sing was. 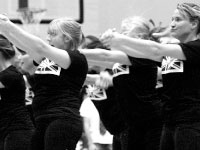 “When we saw [the gym] we knew we were going to have some problems,” she said. “But there was nothing we could do. We didn’t have to turn anyone away, but we had to direct some people to go upstairs [and watch from the balcony.]”
Koors said IFC and Panhel have discussed moving the event to Shea Stadium, the Civic Center or other courts in the Markin Center for upcoming years.
May said he thought the Markin Center was a good place for Pan-Fra-Sing.
“A lot of students seemed to just be walking by and come in,” he said. “I noticed a lot of non-greeks came to watch and that’s what we want. We like to see them look at our accomplishments and have fun.”
The theme of Pan-Fra-Sing was ‘Where in the world are BU Greeks?’
Sororities and fraternities were randomly combined to make teams, and each team was assigned a city to base a dance routine on.
“They practice three or four times a week for several hours,” May said. “People get really into it because of competitive spirit, bragging rights and just because it’s really fun.”
Gamma Phi Beta, Delta Upsilon, Phi Gamma Delta and Phi Beta Sigma’s Chicago-based dance routine came in first.
“I think what they liked about G Phi was that they incorporated the Chicago White Sox and Cubs into their routine,” May said. “The scoring was out of 40 points with five judges, and they got 171 points. For the most part, I think it was right on. The people that got top three you could tell put a lot of effort into it.”
Pan-Fra-Sing is a part of Greek Week, a week-long philanthropy and point-based competition.
First place for Pan-Fra-Sing received 30 points, second received 25, third received 20 and 10 points were awarded to all organizations that participated.
“I think a lot of people give a lot of weight to Pan-Fra-Sing, but it’s about the same percentage as everything else,” May said. “I guess you could say Pan-Fra-Sing is like its own part of Greek Week. There’s the winner of Pan-Fra-Sing, and then there’s the winner of Greek Week.”
In the overall events, Sigma Kappa and Delta Upsilon placed first, Kappa Delta and Sigma Phi Epsilon placed second and Pi Beta Phi and G Phi tied for third alongside Delta Tau Delta.
The events of Greek Week raised $1,129 for the Children’s Hospital of Illinois, Koors said.
More from NewsMore posts in News »