Greeks jive to ‘90s in annual event for charity 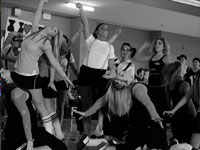 Greek life brought the ‘90s back to the Hilltop in its annual Pan-Fra-Sing during Greek Week.

“We decided on ‘90s pop because we felt that it was an era that most Bradley students have lived through,” Panhellenic Director of Activities Jenny Nguyen said. “[We thought] it would bring back great memories for all.”

The theme of Greek Week allowed the chapters to make it fun and be as creative as they wanted to be with their dances, Nguyen said.

Greek Week chair of G-phi Elle Montrie said she utilized the theme by choosing to poke fun at the classic cliques found in high school.

“We choreographed the dances based on the character the dancers would act out,” Montrie said. “If the jock guys would be doing the dance, we picked a manly song like ‘Men In Black’ by Will Smith, and give the boys moves that made them appear to be cool.”

Montrie and senior health science major Chelsea Peterson were both in charge of this year’s dance for their sorority. For Montrie, this year was her second in charge of Greek Week for G-Phi.

Despite having prior experience in preparing for the week and the dance, problems still arose for her.

Due to sickness and illnesses, it was difficult to prepare for the dance since some participants were sent home and could no participate in the event, she said.

Montrie said she still enjoyed creating and directing the dance, despite the difficulties.

“I love watching the girls and guys who have never danced before get up in front of all greek life and give it all they got,” she said. “It’s a great feeling when everyone wants to come to the late night practices and enjoys the dances.”

Although his group didn’t win, freshman civil engineering major Michael Gonzales said he still was pumped up to perform even though practices were confusing at times with only two girls directing a large group of people.

Freshman industrial engineering major Jeremy Franklin said performing a dance in front of so many people made him really nervous.

Montrie said she was excited to hear her sorority won the dance competition for the second year in a row.

“Winning was such a great feeling,” she said. “It just proved that you don’t have to be the best dancers, [but] you can just do what you love and enjoy yourselves. Chelsea and I were speechless when we won.”

The event raised more than $1,000 dollars for the St. Jude Childrens Research Hospital

“We believed that St. Jude’s has helped so many children and their families in our community, and we wanted to support the kind of good things they do,” Nguyen said.