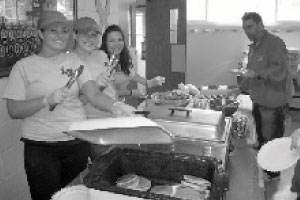 During the spring months, fraternities and sororities all over campus work with the surrounding community to support local and national charities.
“For instance, Kappa Delta canned at Wal-Mart and they also had the Daggerman competition and a pancake breakfast,” Associate Director of Fraternity and Sorority Life Ben Williams said.
Daggerman is a male talent competition and the money from these events goes to Prevent Child Abuse America.
Sigma Phi Epsilon raises funds to benefit a camp for people with disabilities during the spring semester.
“Camp Big Sky in Farmington  gives outdoor access to disabled children and adults. They get to participate in such things as fishing, hiking and boating,” said Vice President for Recruitment Daniel Kahne.
So far the fraternity has raised $1,300 for the organization, and Kahne said he thinks the philanthropies are integral to who the fraternity is.
“I find that through helping others you not only feel better about yourself, but also gain a better understanding of the country as a whole,” he said. “It truly helps put meaning to the rhetoric we hear constantly ‘it’s for a good cause.’”
Gamma Phi Beta recently hosted an entire week of programs for its philanthropy Campfire USA. The money raised for the charity sends underprivileged girls to leadership camps.
Teryn Skowronski, the G-Phi philanthropy chairwoman, said helping these girls is very important to her.
“This particular organization has meant a lot to me,” Skowronski said. “I have always held leadership positions and I feel that I was very lucky to be able to have the training I was able to get to earn these positions.”
Every year, Pi Kappa Alpha hosts St. Baldrick’s day. On that day, many people from Bradley’s community and the surrounding area shave their heads.
“It is a bold act of solidarity to benefit childhood cancer research,” Pike Philanthropy Chair Alex Oberlin said. “We collect money before the event on our official Web site in which friends and family can donate.”
Last year the event raised more than $8,000 to benefit the St. Baldrick’s Foundation. This year‘s event will take place Thursday.
They also put together a Dream Girls Calendar of twelve girls from Bradley. The professional grade calendar will be marketed to more than 200 Pike chapters across America.
Sigma Delta Tau also recently hosted a weeklong event to support Prevent Child Abuse America. Through events such as a pizza dinner, canning, penny voting and a male beauty pageant, the sorority raised about $5,000 for the charity.
There are many other philanthropies supported by the 28 fraternities and sororities throughout the campus. Williams said thousands of dollars are raised every spring and said he thinks this involves the support from all of Bradley.
“The success of philanthropies involves the entire community, greeks and non-greeks are involved and participate. The entire Bradley community gets behind them,” Williams said.
More from NewsMore posts in News »