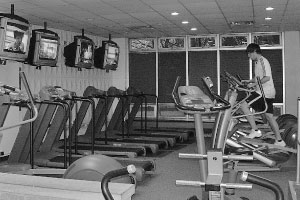 As of next year, the Heitz Hall exercise room will no longer be available, because its usage has slowed since the opening of the Markin Family Student Recreation Center.
Nathan Thomas, the executive director for the center of residential living and leadership, said the main reason the exercise room will be removed is because the workout room was only to be in place until the Markin Center became functional.
“It was a great makeshift facility until Markin was complete and anytime that I’ve been passed it recently, it’s been either completely empty or there’s one person in it so the usage isn’t there anymore,” Thomas said.  “But we’ll find a way to use that space – one where students have a lot of input in what we do.”
Graduate student Nellie Apostolova said she regularly uses the Heitz workout room because it is convenient, smaller and less intimidating.
However, freshman multimedia major Elisa Lopez said she prefers to use the Markin Center, because the equipment is better.
“Markin has more up-to-date equipment and the facility is more like a normal gym,” she said.
Both junior public relations major Marie Hoffman and junior accounting major Allison Hurst said they like the Markin Center because of its track.
Hoffman said she went to the Markin Center more often in the winter.
“I like to just walk, and it’s kind of hard to do that in a few inches of snow,” she said.
Senior English major Jennifer Rooth said she considers Markin to be more beneficial than Heitz.
“The indoor track and pool is a plus, which can really motivate people to work out,” she said.
It is unknown what will replace the Heitz workout room.
“That’s something we’re going to work on,” Thomas said.
He said Student Senate, along with the Association of Residence Halls, will also work on a resolution for it.
Students have mixed feelings about the workout room being removed, but said they have ideas of their own to make good use of the space.
“I don’t think that they should take it away because people still do use it, and having it in such a central location is really easy for people to use,” sophomore social work major Trish Justus said.
Apostolova said she agreed.
“I’m going to be sad to see it go,” she said. “I really enjoyed that space, but I think that if they’ve seen the trend that nobody’s using it they might as well use that space for something else.”
She said she believes a meeting room with equipment that groups can use for presentations, discussions or club activities would be best.
Hoffman said she has never used the Heitz workout room but has ideas for the space’s future use.
“[It could be] a hangout place like Lydia’s Lounge or a storage closet for all of the Heitz air conditioning units over the winter,” she said. “A game room would be nice as well, something like what is in Harper and Wyckoff.”
More from NewsMore posts in News »