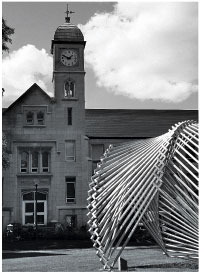 Officials have decided the clock tower on Westlake Hall needs a facelift.
The clock, a gift from the first graduating class of horology at Bradley, has been a key sight for alumni and students.
Bradley was once one of the most well-known schools for the science of measuring time, more uncommonly known as horology.
Director of Facilities Management Ron Doerzaph said the clock doesn’t work and needed attention.
“The south face was damaged by the wind during a storm,” Doerzaph said. “We decided to replace both the south and north faces, as well as rebuild the mechanism.”
The work, which is underway, is slated to be finished soon. Once the work is done, Doerzaph said the clock will be up and running.
“We have been working on the clock and tower and hopefully it should be working by the end of the week,” Doerzaph said.
Westlake Hall, one of the two original structures on campus, is an Illinois Historical Landmark. Slated to receive an addition, Westlake cannot be torn down or remodeled because of its historical legacy. Knowing it will soon have a facelift, both on the clock tower and with the addition, Westlake is not immune to the Bradley makeover.
“Westlake Hall is a historical part of Bradley’s past,” Doerzaph said. “We are trying to keep the building as close to its original design as possible.”
It won’t be long before Bradley’s campus will be running on the clock. So while you are heading out late to your 8 a.m. class, be sure to take a glance up at that big clock face, yet another reminder time just isn’t on your side.
But hopefully, you’ll be able to take a minute and notice the legacy that clock tower holds here at Bradley.
More from NewsMore posts in News »