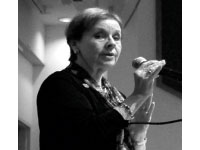 “My story is one Anne Frank might have told – if she had survived.”
Marion Blumenthal Lazan’s story, shared with the campus as part of the school’s Constitution Day celebration on Monday, was similar to Frank’s story.
Retelling her memories of the Holocaust was an important part of Lazan’s speech, but she also stressed the importance of accepting differences in one another and being respectful, kind and open-minded.
Lazan grew up a Jew in Nazi Germany before her family fled to Holland to await passage on a ship to America. She remembers Kristallnacht, or the Night of Broken Glass, when German mobs trashed Jewish homes, businesses and synagogues in 1938.
Her family left for Holland in 1939 to wait for departure to the U.S., but the Nazis invaded Holland a month before their departure and Lazan’s family was forced to live in Camp Westerbork, a refugee-turned-concentration camp in the Netherlands.
After a few years here, her family was shipped to Bergen-Belsen, a concentration camp in Germany where Anne Frank also was held.
Lazan remembered the camp’s filth and noted she was never allowed to brush her teeth in the year and a half she stayed there. The memories of wagons filled with dead bodies still haunts her today.
She survived on a diet of a slice of bread and watery soup once a day, until bread was later doled out once a week.
“It is truly remarkable how any one of us could survive in such horrible conditions,” Lazan said.
After six and a half years spent in Hitler’s camps, Lazan and her family were liberated in 1945. At the time, she was 10 years old and weighed 35 pounds. Three more years of hardships in Holland after the war, during which time her father succumbed to typhus only six weeks after the liberation, followed before Lazan, her mother and her brother left on a ship to America. A Jewish aid society found her family a home in Peoria, where she lived and met her husband.
Lazan’s survival story came with a message – prevent hatred from happening again by practicing tolerance, acceptance and kindness.
“Today’s generation is the very last that will hear these stories [about the Holocaust] firsthand,” Lazan said. “We must begin with you, the students.”
She also asked students to form independent minds.
“Be true to ourselves. Don’t blindly follow the leader,” Lazan said. “The only thing necessary for evil to triumph is for good people to do nothing.”
Lazan’s message was met with a standing ovation from an audience, with some dabbing their eyes after she spoke.
“It is you that will have to bear witness,” she said.
Junior history major Justin Tabatabai said Lazan’s message rang true.
“We can all avoid evil acts if we do good,” he said. “The only way we can repeat what happened is if we do nothing.”
Senior political science and history major Danielle Fezouati also said Lazan’s speech was moving.
“I think her main message was that no matter what happens, stay positive and keep your hope,” she said.
More from NewsMore posts in News »