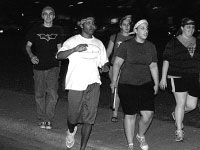 The campus-wide Humans vs. Zombies game was cut short last week when a player was handcuffed for standing in the backyard of a sorority house with a pair of binoculars.
Around 6:30 p.m. last Thursday night, Bradley police were called in to confront the individual.
According to the police report, the student said he was watching Dingeldine Music Hall as part of the game.
Bradley Police Chief David Baer said the call came in reporting suspicious activity, and officers were dispatched to find out what was going on.
“The student took off running when the officers found him, and that just added to the suspicious nature of it,” he said.
Head game moderator freshman Steven Hall said he and two other moderators, juniors Kim Boggess and Erik Johnson, were confronted by the police and asked to stop the game immediately.
“[The student] said he ran from the police because he thought they were also players in the game,” Hall said. “We cancelled everything immediately so we didn’t ruin our chances of having the game next year.”
Freshman civil engineering major Cody Haas said ending the game so abruptly was a letdown.
“I was pretty upset about it because we were so far into the game and I was still a human,” he said. “We had a mission and a storyline going and it was really upsetting to see it get cut short. Plus, being chased by zombies made my week a lot more exciting.”
Freshman business management and administration major Bailey Miller said she was on a “killing streak” when the game was cancelled.
“I was so mad because I was looking forward to winning the final mission as a zombie,” Miller said. “I got really into it, too. I hid in the bushes outside the GCC for 20 minutes one day. I had one person left to kill and then the final mission, but I got a text message saying ‘game over’ and e-mails later explaining everything.”
Baer said while he is aware there are other games on campus involving specific targets, the public’s lack of knowledge about it can cause some concerns.
“In this day and age in society, I have a problem with games that, in fun, use objects like guns and other things that tend to scare people,” he said. “The initial intent is to think ‘someone is being chased,’ not ‘This is for fun.’ There becomes the issue of people calling in because they don’t know what’s going on, like what happened with this student.”
Baer said the student was released when the officer realized it was part of a game, but he had not been in an area where the game was allowed to be played.
“The Student Activities Office did confirm with me that this was a sanctioned game, and that if there are problems next year, there will be a discussion with the students,” he said.
Hall said despite the circumstances, students can plan to participate in the zombie apocalypse again next semester.
More from NewsMore posts in News »