Incoming freshmen, transfer deposits up from last year: Administrators won’t know if goal is met until May 1 but remain cautiously optimistic 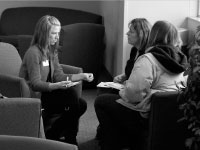 Next year, low enrollment rates will probably not be an issue for Bradley, said Vice President for Student Affairs Alan Galsky.
“What we wanted to do was put ourselves in the position where we would be successful in regards to enrollment,” he said. “I think this is definitely where we find ourselves now. We are successful.”
Enrollment rates are somewhat higher for next year than they were for this year at this time, Galsky said.
“We are slightly ahead at this point, and the next four to five weeks will be crunch time for freshman admissions so we should see more deposits within these next few weeks,” he said. “The number of admissions won’t really change that much, but the number of freshman deposits will skyrocket.”
The number of expected freshmen for next year will be known in about a month, Galsky said.
“The deadline for freshman deposits is May 1, and by May 12 we should know how many freshmen will be attending Bradley,” he said. “However, transfer students will be putting in their deposits through the beginning of August, so we won’t know exactly how many transfer students will be coming until the middle of August.”
Due to the current economic situation and high unemployment rates, enrollment at community colleges throughout the country is at a record high. Although Bradley’s enrollment situation is not an issue for next year, Galsky said the effects are still being felt here.
“Community college enrollment does affect enrollment here as well as enrollment at other four-year colleges,” he said. “The economy causes some students to go to community college rather than here. Five years ago they might have gone here rather than there.”
Even if community colleges are taking possible students from Bradley, less freshmen now might mean more transfer students later, and community college students tend to make up the majority of transfer students, Galsky said.
“A few years from now we may see an increased transfer rate,” he said. “Students originally interested in Bradley may transfer back over here once the economy is a little more stable.”
Until that happens, Galsky said he is very comfortable with Bradley’s current enrollment situation.
“I’m very confident and optimistic that we’ll have enough freshmen,” he said. “We’re doing literally everything possible during the next five weeks to make sure we reach our goal and get this to happen.”
Galsky said he is positive that during the next few years Bradley will be able to meet any enrollment issues it is faced with.
“As we get more prepared to meet the challenges that lie ahead, we will also be able to meet any of the enrollment challenges we might face,” he said. “I don’t think layoffs will be an issue for next year. The enrollment situation currently looks very good.”
More from NewsMore posts in News »