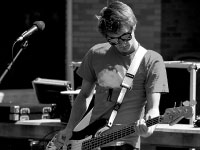 Amnesty International hosted a 9-hour concert to promote awarenesss for people imprisoned for participating in protests and humanitarian activism.
Saturday’s Jamnesty event included performances ranging from “The Fools on the Hill” to a stepping performance from Alpha Phi Alpha Inc.
With 10 performers for the event, many of the bands consisted of Bradley students.
Amnesty International President Ben Elkind said he wanted to include bands that were familiar to the campus and the community.
Amnesty International also had activities such as tie dying T-shirts, face painting and raffles throughout the day.
“It is not only a great event to tie in the community, but it is also a great way to get people out on the quad,” Elkind said. “Not only are we providing entertainment but we are also able to bring our message alongside.”
The concert event raised awareness to imprisoned people such as Myo Min Zaw and Mansour Ossanlu who were sent to jail for their civil protests.
Zaw is a student who was arrested in 1998 by the Myanmar government for participating in a student movement for human rights and democracy in the country of Myanmar. He has been sentenced to 52 years for participating in the movement.
Ossanlu has been sentenced to five years in prison by the Iran government for his effort in building an independent trade union movement in 2007.
Amnesty International considers these two to be prisoners of conscience. A prisoner of conscience is a person who has been sentenced to jail for involvement of a civil protest.
The Bradley chapter of Amnesty International decided to spread awareness of Zaw and Ossanlu with the event to petition their release.
“We’re not trying to change minds,” Elkind said. “We’re trying to bring awareness to things that people can agree upon.”
Money from donations will be used for postage to send the petitions. The petitions will get sent to the embassy, Elkind said.  By collaborating with other chapters from other schools, Elkind said he believes the combined petitions about the same people will make an impact as opposed to just sending it from their chapter only.
Extra money from the donations will go to LiNK, Liberty in North Korea. LiNK is an organization that educates people about the crisis in North Korea. They also provide assistance to refugees from the country, in addition to advocating for freedom and human rights.
Junior secondary education major Angela Dragoo said she came to the event to just tie dye a shirt. However she decided to sign a petition after reading the information on the different people.
“I think a lot of students are unaware what is happening,” she said. “Not only is the tie dying and the concert a way to enjoy a nice day on the quad, but it is also a good way for students to be aware of the issues.”
Freshman theater arts major Ellie Cashen said she did not know the event was creating awareness on the imprisoned people. She said she would have signed the petitions if she saw them while at the tie dye table.
“I support the idea, but they need to make it clearer,” she said.
More from NewsMore posts in News »