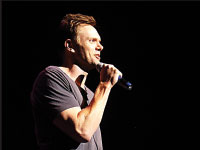 TV personality Joel McHale entertained a packed house with his comical, “Soup”-like stand-up performance at the Peoria Civic Center Theater last Saturday night.
The sold-out Parents’ Weekend show, sponsored by the Activities Council of Bradley University was complete with jokes about family, friends and, of course, outrageous celebrity happenings.
Since 2004, McHale has entertained a wide range of audiences as the host of “The Soup,” a satirical show that airs weekly on the E! Network. He also plays Jeff Winger on NBC’s “Community,” which premiered in September.
Chevy Chase acts alongside McHale in “Community” as Pierce Hawthorne. When asked what it was like to work with Chase, McHale responded, “Who is that?” and laughed. “It’s terrific,” McHale said. “He’s like Nolan Ryan – older than everybody but throws harder than everybody. It’s so surreal.”
McHale said the biggest difference between working on the set of “The Soup” and NBC’s “Community” is the atmosphere. Simply put, “There’s not a big green curtain,” he said.
When asked if there is a reality show “The Soup” hasn’t hassled, he confirmed there are a few.
“I love ‘Deadliest Catch,’ ” McHale said. “And ‘Dirty Jobs.’ We don’t make fun of that.”
McHale’s thoughts on Peoria?
“The best town in all of Illinois,” he said, “that I’ve seen, anyway.”
McHale also played FBI special agent Bob Herndon in “The Informant!,” a 2009 film starring Matt Damon.
ACBU Special Events Reserve Fund Coordinator Kathleen McGing said she thought the opening act, Brooks McBeth, was a great complement to McHale.
“I don’t think that a Parents’ Weekend show was Brooks McBeth’s usual audience, but he adapted his act to it pretty well,” McGing said. “He was really interested in getting to know a little about Peoria and Bradley so that he could make his act really relevant to the audience.”
Tickets for McHale’s show went on sale for students on Sept. 14 and to the public on Oct. 16. They were sold out by Oct. 21.
“It’s always exciting to have a sell-out show,” said Assistant Director of Student Activities Dain Gotto. “I think a lot of people recognized this would be a great show for a low cost, so they really pounced on the opportunity to see Joel.”
Gotto said he expects ACBU to be in a similar situation once Maroon 5 tickets go on sale to the public on Nov. 9. He suggests students purchase their tickets before then.
“We’re expecting the show to sell out that day,” he said.
Joel McHale was the second most expensive act brought to campus by ACBU this semester, with Maroon 5 being the first.
“Based off ticket sales and comments we’ve heard from students, ACBU recognizes that students appreciate having some of these larger scale and more expensive performers on occasion,” Gotto said. “These major events provide entertainment opportunities that students really get excited about, and distinguishes Bradley University from many institutions of our size.”
McGing said plans are in the works for shows next semester, but ACBU hasn’t narrowed down options yet.
“We are looking at both comedians and bands,” she said. “If we bring in a musical act, we would like it to be really different from what we’ve brought in the past few semesters so we can be sure we’re meeting the needs of all students across campus.”
ACBU has also confirmed that K’NAAN will no longer be opening for Maroon 5. The opener will now be Fitz and the Tantrums.
More from NewsMore posts in News »