Lambda Chi makes due without a house to call home 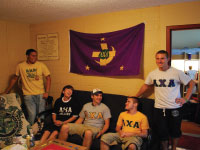 After receiving its charter to become an official fraternity on campus last year, some members of Lambda Chi Alpha have taken the first steps toward living together as a fraternity.
“What is different for us is that we don’t have a location on campus to meet or even just hang out,” said Mike Hoehn, president of Lambda Chi.
The fraternity members occupy about half the rooms on the first floor of Heitz Hall, a dorm usually reserved for freshmen.
Hoehn said having members live together is a big step for Lambda Chi.
“The guys now get to interact with each other on a daily basis,” he said. “Now someone can call one guy on the floor and just go hang out with a bunch of brothers.”
Sophomore criminal justice major Dave Smejkal said living on the floor has brought him closer to his brothers.
“It is nice to have that aspect of your friends living with you,” he said. “But you still get to know the other guys on the floor, too. It’s the same people you would have lived with if we had a house, so it’s great to have that same kind of feel.”
Although nearly half the floor is made up of Lambda Chi members, the other half consists of students not in the fraternity.
Heitz Resident Advisor Tom Winchester said having a floor of Lambda Chis has made his job much easier.
“It really helps build a community on the floor because the guys already know each other,” he said. “They all already have the responsibility to be in the fraternity, and that really helps with the morale on the floor. When we have a program I don’t just get one Lambda Chi, I get 12 Lambda Chis so it’s great that they are all coming together like that.”
Since none of the fraternity members living in Heitz are freshmen, Winchester said they have helped out the other guys on the floor.
“A lot of times when I’m not around and someone has a question they go find one of the Lambda Chis,” he said. “They seem to be doing my job for me when I can’t be here and look out for the other guys.”
Hoehn said finally having a place for members to get together is the first step in moving forward on campus.
“Although it’s not exactly going to help us get a house, it is nice to have a place for guys to escape from campus for a while,” he said.
While the floor in Heitz allows Lambda Chi members to bond as a fraternity, Hoehn said having a place to host chapter meetings and other events, along with the added storage a house would provide, would be an asset to the fraternity.
“We want to continue to have guys live together before they move off campus as we continue to recruit underclassmen,” he said. “But having a house as a permanent feature on campus is something we want to have in the very near future. We have already accumulated a lot of stuff in our short time on campus and it would be nice to have a place for all of us to go.”
More from NewsMore posts in News »