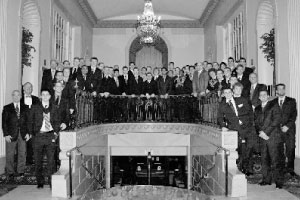 Members of newly chartered Lambda Chi Alpha were surprised on Saturday to be presented with the fraternity’s original charter for Bradley from 1939.

“Everyone was shocked that we received the old charter, no one was expecting that,” Lambda Chi member Matt Depoister said. “Some peoples’ eyes were swelling up.”

Lambda Chi received its charter on Saturday, changing the organization from a colony to an official fraternity.

“We were originally on campus and then members not associated with anyone in the fraternity committed certain acts that headquarters found unacceptable,” Lambda Chi President Mike Hoehn said. “Our charter was revoked twice, but the third time is the charm.”

A number of people spoke at Saturday’s charter ceremony, including Associate Director of Fraternity and Sorority Life Ben Williams, several members of the headquarters staff, the director of chapter services and various members of the fraternity.

Hoehn said he was proud of what his fraternity has accomplished since returning to Bradley last fall as a colony.

“There are certain standards set by the fraternity organization that we had to obtain in order to become chartered,” he said. “We started last fall, and one by one we accomplished all of the standards required.”

Depoister said the ceremony was special to everyone involved.

“I came into the fraternity in the spring and to see this group of guys get to know each other and come together like that was amazing,” he said. “It was a life-changing experience to be involved.”

Hoehn said despite the previous colony status of the fraternity, they orchestrated spring recruitment anyway.

“We did spring rush just like the other social fraternities, but ours was in Heuser and that is where guys wanting to rush with us went,” Depoister said. “We set up a projector and were able to put a presentation on it and it all worked out nicely.”

Hoehn said Lambda Chi participated in formal rush in the fall and has informal rush year-round.

“I was one of the initial 37 or so members, and I feel a strong sense of responsibility to help the fraternity grow,” he said. “I want it to remain strong after I graduate.”

“Our core values are loyalty, duty, respect, service and stewardship, honor and personal courage,” he said.

Hoehn said having the original charter of the fraternity would keep members focused.

“To have a strong piece of our history like that is a reminder of what we came here to do,” he said. “If our fraternity is not the oldest on campus, it is certainly one of the oldest.”

“The day after the ceremony we associated five new members,” he said.

Hoehn said he hopes Lambda Chi can stay on campus long after he graduates.

“We are back and here to stay,” he said.