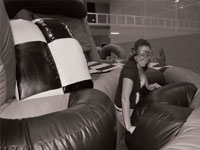 Students, get ready to pack your bags for Las Vegas, Tampa or Phoenix.

Or maybe a cruise is more your style, so grab your suits and suntan lotion, because at tonight’s Late Night BU, two huge prizes are up for grabs – a pair of roundtrip tickets to Vegas, Tampa or Phoenix and a cruise for two.

The cruise winners can choose to sail out of either Miami or Port Canaveral, Fla., for four days and three nights.

Director of Wellness Programs Melissa Sage-Bollenbach said the Peoria community has been seeking Late Night BU as a way to get more involved with campus.

“It is truly amazing how many people contact us to try and get involved with this program,” she said. “Peoria is a very generous community and many people have contacted us … The Rivermen wanted to support the event and wanted to give away the cruise.”

The same thing applies for the airline tickets. Sage-Bollenbach said Allegiant Air called her office and wanted to get more involved with the Late Night events.

“Allegiant will be giving away round trip tickets at each of the remaining events this semester,” she said.

Freshman AEP major Matt Kemper said he attended most of the events last semester and plans to go to Late Night BU tonight.

“My friends and I go for the environment and just to have something to do,” he said. “Being a freshman, I can’t head out to the bars, so it gives my friends and I a place to go and have a good time.”

Kemper also said the atmosphere at the events is exciting because so many people always attend.

And even though the prizes are bigger than ever, Sage-Bollenbach said she doesn’t expect to see an increase in attendance at tonight’s event in the Markin Family Student Recreation Center.

“Crowds have been very big this year,” she said. “We have been averaging about 1,200 per event and that’s what we are planning for. If we get more that would be great, but we don’t expect anything over-the-top.”

“We are really excited about this one, because it is the first event where we have really tried to center every single activity around our theme,” she said.

In addition to the usual food, give-a-ways and inflatables, the event will also feature ’80s cover band Hello McFly.

Kemper said he was excited about tonight’s theme.

“It’s nice to hear that the theme is actually going to be taken seriously and incorporated into almost every activity,” he said.

And while the purpose of Late Night BU is to provide alcohol-free programming on campus, Sage-Bollenbach said the event is important even to students who may go out drinking after attending.

“It is important for people who do decide to drink to have a place to go,” she said. “Maybe cut back on drinking or even have a meal before going out … it provides something for everyone.”

She also said she hopes students continue to support Late Night BU events and keep them a major part of campus life.