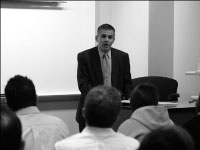 Univeristy of Louisville law professor Samuel Marcosson visited the Hilltop this week to give a speech about gay marriage and Proposition 8.
Marcosson, a Bradley alumnus, compared the denial of gay marriage to the suppression of ethnic minorities.
“When the government denies rights to a small minority group we are at the intersection of fundamental rights,” he said. “All oppressions are common. Common bonds are there but they must be built.”
He shot down claims that civil unions and marriages are equal.
“They are isolating the minority by not giving the label,” Marcosson said. “When you peel it back there’s an ugly reason.”
He said he opposed civil unions because he was “an old-fashioned guy.”
“There are benefits outside of religion,” he said. “[Such as]identifying one person responsible for your care and who you are responsible for … I want my share, my entitlement to it.”
Marcosson used Massachusetts as an example of the positives of gay marriage, calling it a “sky is falling down” theory.
“They predicted [when gay marriage was legalized] that marriage rates would go down and divorce rates would go up, but the opposite ended up happening,” Marcosson said. “Calamity didn’t happen. It brought people economic benefits of marriage.”
Marcosson spoke a lot about  California lawyers David Boies and Theodore Olsen and their plan to get the federal court to overturn California’s Proposition 8, which bans gay marriage. He described it as “the wrong time but the right case.”
He said all other cases were brought to state courts and only state courts and Boies and Olsen could be a precedent-setting case that the nation is not ready for.
“As much as we’d like to think the Supreme Court is immune to what the nation thinks it is sensitive to where the country is,” Marcosson said. “They did not act on racial inequalities until they saw the country warm up … if the Supreme Court strikes down Proposition 8 it is only if the country will have caught up with states.”
He said he thinks victory could be won but only if the timing is right.
“When so much is at stake you have to present a strong case,” he said. “I don’t see it, I wish I did … Boies and Olsen could be detrimental by bringing the case to the Supreme Court before it’s ready.”
Marcosson also pointed out that this case could have an effect on several other areas concerning gay marriage.
“Every issue could potentially be set back by the Supreme Court’s ruling,” he said. “This could include issues such as child support or adoption.”
He said Boies and Olsen wanted an accelerated trial schedule, but the judge disagreed and demanded a full trial. He estimated the trial would occur next year, be decided by 2011 and could possibly go to the Supreme Court by 2012.
Marcosson said efforts should be given to state rights first and recommended the case be delayed. He gave the example of a comment Supreme Court Justice Antonin Scalia had made comparing being a homosexual to being a murderer.
“These are the kinds of people Boies and Olsen want to try this case,” he said.
Marcosson was a 1983 graduate of Bradley and graduated from Yale Law School in 1986. He teaches Constitutional Law, Sexual Orientation and the Law, Employment Discrimination and Criminal Law at the University of Louisville.
More from NewsMore posts in News »