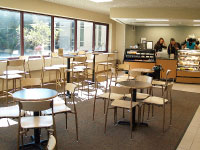 A new cafe serving coffee and other snacks opened in the Cullom-Davis Library earlier this week to serve students looking for a quick caffeine fix on their study breaks.
Executive Director of the Library Barbara Galik has been working closely with students for almost a year to get the cafe built.
“We have really been wanting to get this put in for a while,” she said. “I worked with a student advisory committee all last year and we finally got it done.”
The cafe was created by the Library Student Advisory Committee. That group was formed in response to low rankings in the Princeton Review.
Galik and the LSAC accepted student ideas and suggestions for the entire building before submitting an entire report to President Glasser last year.
The new cafe serves Starbucks coffee along with snack foods such as muffins, and the addition has also brought about a change in the design of the library.
Last year, the front section of the library had long tables where students could meet with groups to work on projects, but those have been replaced by smaller, round tables where students can eat lunch.
“We have extended our food and drink policy so people can sit outside the cafe and eat their lunches,” Galik said. “We also plan on moving our leisure reading, graphic novels and book exchange sections to the front of the library.”
Junior advertising major Stephanie Schumacher said she thinks students will use the space to study and grab something to eat.
“It’s great that they have finally used that space for something productive,” she said. “Even though they had the break room there before, I think a lot more students will be able to use the cafe.”
Galik said the intention is to create a space where students can just sit and hang out to take a break from studying or meet with professors.
“It is going to be a good place for faculty and staff to meet with students and talk about any issues they may be having,” she said.
University President Joanne Glasser said she is excited about the addition of the cafe and said she hopes this will bring more students into the library on a regular basis.
“It is truly a terrific addition to our changing and evolving campus,” she said. “Libraries don’t just hold books and reference materials anymore – they’ve become gathering places where students and faculty can interact, students can study by themselves or can just have a positive, enjoyable experience.”
Glasser also said the addition will help show students the university is listening to their requests and acting on them.
“The cafe demonstrates that the focus at Bradley is where it should be,” she said. “It represents that the focus is on students. This is your cafe, your library, your university.”
The cafe is open every day from 10 a.m. to midnight, but Galik said she hopes to eventually expand the hours.
“I’ve been pushing to get it open at 8 each morning,” she said. “It’s conveniently located by fraternity and sorority row, and I think it would really be used by the faculty and staff in this building and Swords.”
The cafe is currently unnamed, but a competition is being held to decide on a unique, student-submitted name for the space.
The winning submission will receive a prize, although exactly what will be given away has not been announced.
Junior health science major Rachel Berry said she thinks the cafe is a great addition to the currently under utilized library.
“People at Bradley don’t think very highly of the library right now,” she said. “Maybe this will be able to change some people’s minds and give them a better feeling about using the library to study or hang out.”
More from NewsMore posts in News »