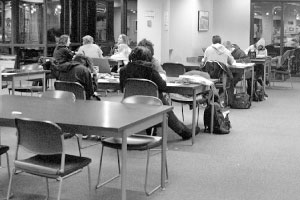 Committee’s draft marks improved printing, better lighting and addition of outlets as most important
In response to poor results in the Princeton Review, the Cullom-Davis Library has created a Library Student Advisory Committee to gather information on student concerns and prepare a draft.
The draft states the problems that need to be addressed quickly are the printing, and more circuits and outlets need to be added.
Sophomore nursing major Liz Arnold said she agreed.
“It’s really inconvenient that there are only two places to print,” she said. “But the big thing that should be fixed is the fact that there aren’t enough outlets to plug your computer into.”
Galik said LSAC is moving forward on improving the printing system.
“The current VendPrint for printing from library computers does not meet our needs, and the LSAC members said that improved printing is a critical need,” she said. “A task force comprised of representatives from the LSAC, Student Senate and Computing Services is working on a pilot project for a new printing system to be implemented next academic year.”
The pilot project will be tested by giving students a specific number of printouts. Each page they print out will be deducted from that number, that way they won’t have to rely on the swiping system the library uses now.
Funding will have to be added to the library’s budget, and according to the draft, the estimated cost for the new printing services would be $50,000 to $60,000.
“With the current economic situation, I think it will take longer to achieve the goals [in the draft], but this is what we determined needs to be done to improve and enhance the environment and condition of the building as well as some of the services offered,” Galik said.
To deal with the lack of outlets, the draft recommends an electrical audit of the entire building and suggests waiting for the results and cost of improving electrical capacity before moving forward.
Other issues to be addressed are lighting, temperature and expansion.
The lighting system has not been improved since the ’90s, and there are parts of the library where it is so dark, students can barely read, according to the draft.
Galik said in the draft an analysis of lighting will give an estimate of the cost to bring lighting up to standards, but LSAC is looking at $80,000 to $90,000 to fix the issue.
A major issue students said they have is space.
“They need to make the studying environment better,” Arnold said. “It’d be great if they could put in more study rooms, it’s hard to get one at night. And if they can make new ones, they should make them soundproof. Right now you can hear everything that goes on in the room next to you.”
Sophomore international business major Ingrid Aguilar said the lack of space is the reason why she doesn’t go to the library.
“I usually only go for finals or group projects,” she said. “To do homework I need a  quiet place to study and the only quiet place would be the study rooms on the second floor, which are usually packed.”
Aguilar also said she agreed with the idea of soundproofing the rooms.
“I hate when I can hear music from the next room or people talking on their phones,” she said. “They should get rid of the glass walls too, they’re distracting.”
Galik said in the draft there are only two ways to expand the library – by adding a third floor to the west side and building a wrap-around that moves the library closer to Bradley and Glenwood Avenues. They could also add square footage toward Westlake Hall.
Another way to cut down on sound is soundproofing the floors.
Galik said when replacing carpeting, LSAC will be look at color schemes, durability and sound absorption.
Arnold also said she thinks the general atmosphere could be improved.
“The basement is depressing, and the environment needs to be worked on,” she said.
The draft said the committee is working on buying $400,000 of new furniture and replacing computer tables with more modern wooden furniture.
An example of a change is the replacement of the tables that seat four people with two separate tables that can be pushed together.
“In observing student study patterns, if one student is studying at a table for four, nobody else will sit there,” the draft states. “By putting in two tops, we will create more space for users in the library.”
Galik said there is no budget for the projects, but the draft outlines the funding needed for them.
“The goals outlined in the Final Draft Report were intended to be a implemented over a period of several years,” she said. “This will not happen overnight and with the economic situation, it will take longer overall to achieve these goals. However, I do believe the goals are realistic and doable.”
More from NewsMore posts in News »