Library committee not done with plans 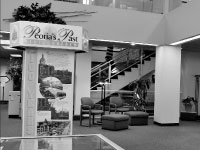 The Library Student Advisory Committee is looking to fill three vacant student positions by Fall Break.
The positions are available to replace the three students who graduated last year. New members will be appointed, can nominate themselves or be nominated by others. The committee also plans to increase its size from last year by adding two additional seats.
“We would want somebody who is certainly a student leader, somebody who is interested in that area [and] someone who is at least a sophomore,” said Vice President for Student Affairs Alan Galsky.
Initially, LSAC was formed in the spring of 2008 because of concerns among students in regards to the quality of the Cullom-Davis Library and low ratings in the Princeton Review.
Executive Director of the Library Barbara Galik said “with the Princeton Review [ratings] I knew that we had to have a committee, so it was something I needed to do.”
Galsky also said a committee was needed to turn the library around.
“We want to make sure we have a modern library, not only educationally and technologically, but socially as well,” Galsky said.
He said libraries have changed because of technology and that LSAC is beneficial in getting student feedback in order to improve library standards.
Individual benefits of being an LSAC member are making a difference in the quality of library, learning about libraries and higher education and gaining insight on how university committees work, Galik said. Once positions are filled, LSAC will meet regularly with Barbara Galik to develop ideas on how to improve the library and to measure the effectiveness of the already-made progress.
The committee’s main focus is to continue to review a report drafted and revised from July through December of 2008.
“They submitted this report to the university administration, and we decided we would try to act immediately so we could implement some of the recommendations as early as the beginning of this fall,” Galsky said.
The goal for the university administration was to execute at least three of the report’s recommendations. The three recommendations completed this fall were the instillation of a full-service help desk, simplification of the printing system and the opening of a cafe.
Galik said the renovations were not paid for with library money.
“None of the improvements came from the library operating budget … [the renovations] was all money paid for by the administration,” she said.
Currently the committee is working on refurnishing the first floor to go for a “comfy and cozy” feel.
“The furniture today is not really what students want to use [and] I don’t think they are as comfortable as what students want them to be,” Galik said.
She said she believes this would “improve the vision of the library,” since the first floor receives the most activity and also leaves a lasting impression on visitors attending a tour.
Galsky said he is looking forward to working with LSAC and values the committee’s commitment in overseeing library improvements.
“This is an important committee because the quality of a university library is critical,” he said. “We want to make sure this committee is current and updated, and service as a constant advisory committee so we can improve our library on a regular basis.”
More from NewsMore posts in News »