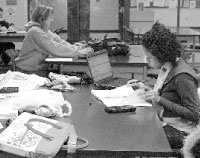 A committee to address library improvements has completed a proposal that includes better printing options, a more comfortable study space and a better collection of materials.
The Cullom-Davis Library has consistently been ranked low by the Princeton Review, and in response to this rating, Executive Director of the Library Barbara Galik developed the Library Student Advisory Committee in Spring of 2008.
The committee chose to combine the complaints of students from surveys and personal experiences into one singular project.
“There are a lot of issues with heating, air conditioning, outlets and a need to increase area for study groups … among other things,” Galik said.
These demands have not gone unnoticed by the committee itself. The committee is comprised of five students.
“They talk to other students and faculty to get opinions and they are very active while working on the committee,” Galik said.
The process for finding these flaws came from many sources, she said.
“We took into consideration the various surveys taken by fellow students in what they wanted to see improved [and we] looked at other very successful libraries to see what they were doing that was different from us,” Mueller said.
Future plans for the library have also been accompanied by many immediate changes.
“The library is open many more hours and the whole library is open instead of just one floor at these late hours,” Galik said.
The committee was also responsible for making the library more study-friendly during finals week.
“We started Midnight Munchies, which offers coffee and snacks to students late at night, along with 24/7 library hours,” Galik said.
Overall, Galik said she thinks the proposal and renovations are a necessity.
“This is due to the library being a little outdated,” she said. “The last time the library was renovated was 1990 and it was meant to last until 2000.”
The proposal was completed last semester and is currently being reviewed by University President Joanne Glasser.
Students said they have noticed the areas where the library lacks in necessity.
“The library needs more outlets, new tables, they need more books, a vending machine that accepts QuickCash … overall a more modern-looking library,” sophomore health science major Jason Pullan said.
In addition to physical renovations, the library’s collection may also improve.
“There are things in the proposal about materials,” Galik said. “But, I need to get the faculty’s point of view on offering those materials through the University Library Committee,” she said.
Other students said they agreed the library needs updating.
“The lighting could be improved. It can be too dark for studying,” sophomore accounting major Kyle Malinowski said. “They also need to offer more printing and copying machines. I do really enjoy that they extended the hours, though.”
The committee plans to test out some new changes this semester so students will not have to wait until the renovations are put into motion.
“We’re doing a pilot project this semester where the library will regularly be open until 4 a.m. Monday through Thursday and 5 a.m. during midterms,” Galik said.
She said this was mostly because of surveys and complaints from students.
“Many students were complaining that they couldn’t get over during the day because of their class schedule and other engagements,” Galik said.
There have been many students as well as faculty asking about the incorporation of a cafe into the library, but no plans have been made yet, Galik said.
“Right now, it would be a problem figuring out where to put a cafe and where to get the funding,” she said.
More from NewsMore posts in News »