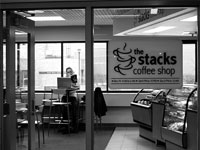 Students who have been to the library since Winter Break may have noticed a few changes in the building, including new laptops and more study space.

“We’ve made pretty significant progress improving the library so far, and we’re intending to do more this semester,” said Shelley Epstein, associate vice president for communications.

Monitors have also been installed in six study rooms on the second floor for group study, and ways to soundproof, or at least reduce the level of sound, between the rooms is being evaluated, he said.

A lot of the furniture is also being refinished and reupholstered.

“The first of the wooden chairs being refinished are back and in use,” Epstein said. “The remainder will be finished over the next few months. Reupholstering of furniture on the first floor has also begun with the ordering of new fabric. Chairs will be reupholstered in groups of 20 over this semester.”

“Digital signage that will provide students with information on campus events has also been recently installed,” he said.

Although there were several improvements made just over this break, upgrades will continue throughout the semester.

Some of the future upgrades include electrical work for the computers, upgrades in the Packard and Burlington Northern rooms, card access for late night entry to the front door, and new furniture for the first floor.

“The new furniture includes computer tables to allow distribution of computers out over the first floor from the current computer bank to make access and use easier, comfy chairs and ottomans for reading and study and movable tables for group study will be ordered,” he said.

Students, however, would like to see a different kind of change in the library.

“I’m glad sitting in the library will be more comfortable due to the increased study space, and the new laptops will help with desktop limitations,” said sophomore chemistry major Richard Villarreal. “New and updated books would have been the smarter choice, I think. The library looked fine before; newer books would have made the library a better asset for students doing work for their classes.”

“The new study space is neat, but I was quite disappointed when I found out that no new books were added to the library’s collection,” he said.