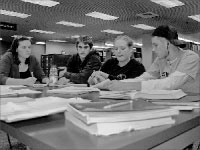 The Cullom-Davis Library staff is working to help make this semester’s finals season as stress-free as possible by providing additional space and food options.
Executive Director of the library Barbara Galik said the library should be more conducive to studying during finals, serving as an option to other study areas.
“It is our way of trying to help students at the end of the semester,” she said. “Dorms, fraternity/sorority houses and apartments can be noisy and not necessarily conducive to good studying.”
To provide optimum service to students using the facility, Galik said the hours would be extended, as usual, during exam time to be open 24 hours a day, seven days a week. There would be more open areas for studying, rather than the one floor during the late hours of the library.
“We will not be adding tables but rather adding open floors.  The basement, first floor and second floor will all be open during final exam time,” Galik said.
She said many of the changes going into effect are directly related to student feedback received via a student survey the last year. While there has been some input from the administration, such as tossing around the idea of a cafe within the library, Galik said much of what is going on in the library is because of students’ voices.
“The extended hours pilot project is in response to student feedback for more hours [of availability].  The library has been open until 4 a.m. Sunday through Thursday all semester and the 24/7 hours will be on three floors of the library and not just one,” she said. “This again is in response to concerns from students that there was not enough room on just one floor.”
Galik also said she sees the importance of maintaining a good eating routine while studying, and tries to curb students unhealthy eating habits by offering food and drinks to students while studying.
Midnight Munchies, a program started in fall 2005 by the Library Public Relations Committee, is put together through donations from individual people, campus departments and the Friends of the Library.
“Students need some sort of sustenance while studying,” Galik said. “We try to offer healthy choices as well as sweets.”
Offering free coffee, tea and hot chocolate in the break room at all hours, as well as food made available at midnight, the committee hopes this program will get students prepared for the difficult task ahead of them.
“The work is done by members of the committee and other library staff as a service to make the library more inviting and comfortable during finals,” Galik said.
Along with Midnight Munchies, Galik said there will be a fraternity selling Krispy Kreme donuts to support Chai Lifeline.
She said while most of the additions are available during exam times, they are open to thinking about ideas for the future. Talk of a cafe had circulated around campus, however, Galik said it is easier said than done.
“As for a cafe in the library, we have discussed this on and off for a couple of years but lack of space and funding has been a stumbling block,” she said. “Midnight Munchies was a partial response to a cafe.”
Galik said the library is a place where students tend to spend a lot of time during the week of finals. She said she hopes to see a good use of the facility in order to continue on with the program.
“Finals are a difficult time for students, and by providing longer hours and free beverages all during the week and free food at midnight we hope to make it a little less difficult,” Galik said.
More from NewsMore posts in News »