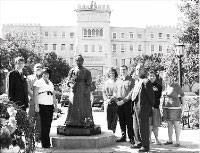 Alumni, faculty and staff came together to pay tribute to founder Lydia Moss Bradley at this year’s Founder’s Day celebration.
University President Joanne Glasser said the day is a gathering “to commemorate [Lydia’s] vision and her genius, to thank her for her wisdom and her foresight, and to recognize what a special place this is.”
Board of Trustees Chairman Gerald Shaheen spoke after Glasser.
“I think it’s an event in these days and times when our lives are so fast often times we don’t think about the past and those who went before us,” he said.
The festive occasion began with the Founder’s Day Convocation taking place at Dingeldine Music Center. Faculty awards for teaching, research and service were presented at the ceremony.
Freshman AEP major Shera Stear said she admired professor of communication Bob Jacobs, saying “he’s been excellent to work with.”
Junior electronic media major Sandra Hall said she agrees. Hall said Jacobs is “a very modest individual.”
Hall said she was pleased to have attended to watch Jacobs receive his award.
“It was a complete surprise to him,” she said.
Also during the event, six alumni were inducted into the Centurion Society, which honors distinguished alumni. The 2008 inductees were: Renee Byer, Theresa Falcon, James Kenny, Edward King, Ray LaHood and Gary Peplow.
During the ceremony, Shaheen emphasized periodic renaissance moments in which a university experiences a remarkable rebirth.
“We truly are at another renaissance moment in the history of Bradley,” he said. “We’re in a point in time when opportunity, talent and resources are coming together again to advance our mission.”
Glasser said she believes “the vision that is now being realized in the Campaign for a Bradley Renaissance is just the start.”
Student Senate has rituals of its own during Founder’s Day.
Senate placed roses on Lydia’s statue and put a wreath of roses on her gravesite at Springdale Cemetery, as well as her husband Tobias’ and their children’s, Student Body President Jordan Ticaric  said.
“Bradley has kept these traditions because it’s important to keep any tradition that keeps people coming back and staying together,” Ticaric said.
Shaheen also spoke about the importance of Bradley in the lives of its students and alumni.
“This university has never let any of us down – it’s a family,” he said. “It’s instrumental in many of our [successes].”
Ticaric said this year’s Founder’s Day was a success as well.
“So many people came back to commemorate Lydia and what she did, and I think that in itself is a success,” she said.
Glasser said Founder’s Day is important to Bradley’s past and future.
“To the Bradley University family, Founder’s Day has been and continues to be an occasion of joy, of thanks, of remembrance and of looking forward,” said Glasser.
Overall, Lydia continues to serve as an inspiration to all here at Bradley.
“By the example of her strength in the face of despair, we are inspired to reach for the stars,” Ticaric said. “She showed us that with determination and perseverance, through times that many of us cannot even imagine, anything can be done.”
More from NewsMore posts in News »