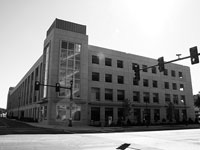 The Main West parking deck opened the first day of classes, but commuters are the only students that can use it.
The parking deck, located on Main Street next to Jobst Hall, adds 622 parking spaces to campus, Parking Director Charmin Hibberd said.
“The new deck is only open to commuter students, faculty and staff who have a current permit,” Hibberd said. “We currently have about 1,200 full and part-time commuter permits sold this year. That number doesn’t include faculty who may only be using the deck part-time.”
Special university guests will also have temporary access to the garage, Hibberd said.
“Guests coming to give a presentation or employers coming to a job fair will receive a special red access card in order to get in and out of the garage,” she said.
Some commuters who do have access to the garage said they like having a deck specifically for their use.
“All of my classes are in Jobst,” junior mechanical engineering major Josh Hicke said. “The new deck is the closest spot to park and it’s nice to have it for commuters.”
Although teachers are allowed to use the Main West deck as well, some feel parking there would be more of a hassle than it’s worth.
“The new deck is not the first place I would look to find a parking spot,” professor of communications Sara Netzley said. “I am always going to look for close parking, and the [Global Communications Center] is the furthest building from the deck, but it’s nice to know there will always be spots there if everything else is full.”
Hicke said he felt the new deck will help the parking situation, and it’s convenient to have a place for commuters to keep their cars long-term.
“There is always a place there to park,” he said. “The first two levels are generally full, but three and above are pretty much empty.”
The Main West parking deck was open for all students and parents to use on Move-In Day, with swipe-card access starting on the first day of classes, Hibberd said.
“We know there is always a lot of overflow that weekend,” she said. “It was important for us to get the deck open on time so parents and students could use the deck during that time.”
Permits for the deck cost $50, the same as permits for other parking areas on campus, and a valid Bradley ID is needed for purchase of the permits and entry to the deck.
Commuter students will also have shelter for their vehicles.
“Inside the parking deck you won’t have to worry about snow on your car,” Hicke said. “It is especially nice if you are leaving your car there over night.”
Although not all students can use the deck, Hibberd said she wants everyone who can use it to do so as much as possible.
More from NewsMore posts in News »