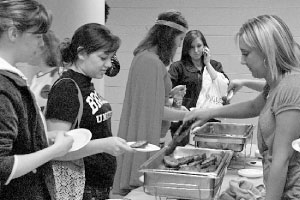 Interim Coordinator of Alcohol Education and Awareness Programs Lyndsey Withers and Director of Wellness Programs Melissa Sage-Bollenbach seem to have fallen victim to the season’s March Madness.
But rather than checking out a spot on the couch to catch up on the latest college games, these two are putting together a game plan for tonight’s Late Night BU program.
“We love talking about Late Night BU,” Withers said. “It’s something fun that we do that lets us collaborate with two other really great campus student groups.”
Withers and Sage-Bollenbach teamed up with the Student Activities Office and Campus Recreation to put together tonight’s March Madness-themed event.
“The whole night is devoted to this competitive sports theme that fits in with the month’s college March Madness theme,” Withers said. “We have a bunch of really great sponsors that are working with us to make this Late Night BU a really exciting one.”
Tonight’s Late Night BU will be sponsored by BU summer sessions, and it will help students prepare for and get information on taking summer classes at Bradley. Another sponsor for the night is Alexander’s Steakhouse, which helped to sponsor the first Late Night BU in October.
The restaurant will supply all the food and drinks for the night’s events, including a new menu from its last visit.
Withers said the positive feedback Late Night BU has received was unexpected because of what she had heard about other university late night programs.
“We were told by other colleges that we would get maybe 10 percent of our student population at events like this. For us, that’s about 500 students,” she said. “However, we were overwhelmed at first. Our first Late Night BU was about 900 students and we have been at around 750 students since then for each event.”
What the two said surprised them the most was the willingness for student organizations to get involved.
Sage-Bollenbach said she thinks it’s great that the student organizations are able to come out and contribute their talents to the events.
“They bring what they have to the table,” she said. “All the organizations are coming together to showcase what they have to do here on campus. It’s a great way for students to come together on campus without having to travel or spend a lot of money for fun.”
Many of the activities planned for tonight are being run solely by student groups.
The Bradley Tech Crew is putting on a RockBand tournament, the Body Project is hosting a kickboxing class and Race for the Cure is sponsoring a “Night at the Races” event in which students can bet fake money and win prizes for picking the right horse.
“The collaboration with the Student Activities Office and their relationships, the campus recreation, who knows the facility, and the student groups who bring the people has been great for our own program as well,” Withers said.
The next Late Night BU will take place from 10 p.m. to 2 a.m. tonight in the Markin Family Student Recreation center.
More from NewsMore posts in News »